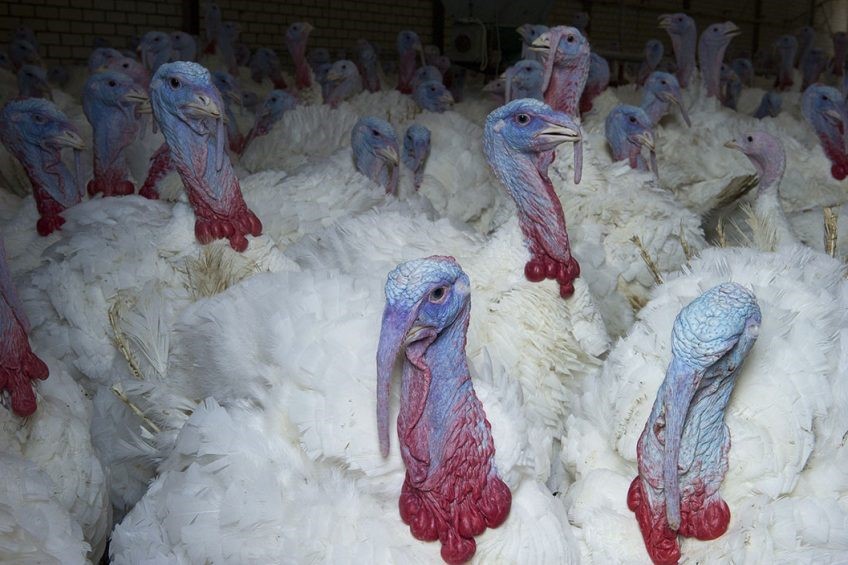 Growing problems with antibiotic resistance and increasing pressure from the general public have led to regulations which prohibit the use of growth promoters or antibiotics in turkeys. Photo: Marcel van Hoorn

With relatively high use of antibiotic growth promoters, turkey production is in the cross hairs.

Research looks into the effects of functional oils on the growth, carcass and meat characteristics, and intestinal morphology of commercial turkey toms and concludes they may offer a viable alternative to antibiotics.

Extracted oils are defined as ‘functional oils’ because of their action beyond their nutritional value and status as neither spices nor essences. A commercial product containing extracted cashew nut shell liquid and castor oil has previously been shown to successfully protect broiler chickens against coccidiosis challenges and to improve broiler performance.

Cashew nut shell liquid has active components which are alkylphenols. These possess antioxidant, molluscicidal, antitumor and antimicrobial properties. Some inhibit certain enzymes and are known to improve meat quality or freshness. Castor oil is a triglyceride in which 90% of the fatty acid chains are ricinoleic acid. It further has anti-inflammatory properties and acts against some fungi and gram-positive bacteria. Broilers whose diets were supplemented with these mixtures showed a significantly greater body weight gain at slaughter (6 weeks) than the controls. Additional effects were demonstrated when these functional oil mixtures were administered under heat stress conditions, in which breast meat yields were not reduced compared to controls without supplementation.

Antibiotic reduction – special publication
Moving away from antibiotics can be challenging and requires a new way of thinking, adapting feeding practices and biosecurity plans, for example. This special edition explores the latest methods for raising healthy livestock without the use of preventive antibiotics.

No studies are known which examined the effects of functional oils as an alternative feed additive for commercial turkey toms on growth performance, meat characteristics and intestinal morphology. To study the effects, 585 hatchlings were randomly placed in 15 replicate floor pens (13 poults/pen) with recycled litter and feed and water provided ad libitum. Birds were randomly assigned to 3 dietary treatments from 1 to 12 weeks: non-medicated control, 0.15% functional oils and 66 ppm monensin. From week 13 to 20: each initial treatment group was further subdivided into 3 treatments – control (no additive), 0.15% of functional oils or 20 ppm of virginiamycin, to produce 9 different treatments, with 5 replicate pens per treatment.

Data on feed weights were collected weekly, and body weight bi-weekly. At termination (20 weeks) birds were euthanized and their meat was processed to determine the mass of carcass sections and meat quality, while intestinal samples were collected for histology. At 12 weeks of age toms fed functional oils or monensin were heavier than the controls by 4.5% and 10.5%, respectively. Birds fed monensin showed a 4% improvement in feed conversion compared to the other treatments. Neither the functional oils nor virginiamycin affected bird performance when fed from 13 to 20 weeks. The jejunum villi surface area at 3 weeks was most enhanced for the poults fed monensin. Supplementation with functional oils significantly reduced leg yield and thiobarbituric-acid-reactive substances of white meat after 7 days of storage. The results indicate that functional oils in the diet of turkey toms may offer a viable alternative to antibiotic growth promoters, although more research is needed.