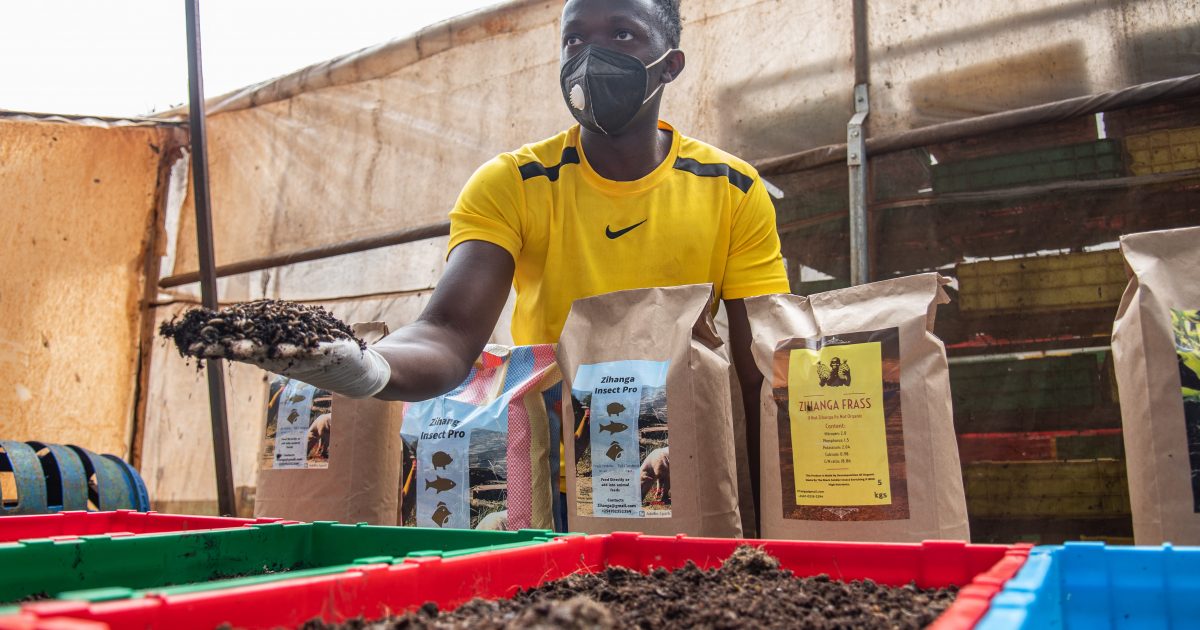 The future of feeds in Kenya has been bleak following concern over unprecedented increase in animal feed prices as well as shortage.

Livestock keepers and animal feed manufacturers have said that prices of the raw materials have gone up by almost 65 per cent while feed prices have also gone up by an average of 20 per cent.

Insect rearing is now gaining traction in Kenya for providing a cheaper and more nutritious source of protein for livestock, while easing pressure on products like fish and soya, which can then be consumed by the local human population instead of being used in conventional animal feeds.

Young entrepreneurs in Kenya have discovered a niche and are now venturing into promoting insect-based technology for not only feed but also food in order to enhance productivity.

Nicholas Mareve, 24 from lower Kabete, is one among over 200 small entrepreneurs and other 3,000 farmers in Kenya trained to tap into the opportunities of rearing the Black Soldier Fly (BSF) and to sell as feed and as organic fertilizer to farmers in the area.

“I cleared university majoring in finance, but veered off and joined this venture of insect production, thanks to the International Centre of Insect Physiology and Ecology (ICIPE) under the Insect Feed for Poultry and Fish in Kenya and Uganda (INSFEED) project,” he said.

Mareve explains that through the training, he has managed to get waste from nearby markets and slaughter houses to produce the eggs for the BSF farming process that takes about 10 days.

“One man’s waste is my gold. I source waste to help in production of the black Soldier Fly eggs from Wangige market and in Ndumboini pig slaughter house in Kikuyu area,” he said.

Mareve makes about 300 to 600 kilos of the dried BSF insects per week and sells a kilo of the dried insects at Sh140 a kilo and also sells the organic compost to tomato, onion and strawberry farmers in the area.

Mareve who has been joined in the venture by other young likeminded youth under a youth program, ‘Y-Minds Connect’ and ‘Zihanga Ltd’ enterprise, sells his products under the name ‘Zihanga’ Limited, which he explains was from the aspect of ‘zero hunger’, to put an emphasis that his products promote zero hunger initiative.

Doreen Mbaya Awiri, a poultry farmer and the proprietor of ‘Bugs Life Protein’ Limited in Muua area, Machakos and also a beneficiary of the training by ICIPE, says her venture into  the  Black Soldier Fly, is solely to be able to cut costs on  poultry feeds.

She got some five (5) kg of insects from ICIPE and started to produce and multiply. She expanded by putting up a greenhouse to produce the Black Soldier Fly in large scale and in order to be able to feed the 6,000 birds she has in her farm.

“Apart from producing enough BSF to feed my birds, I am now also selling the surplus I get to a company in Athi River that produces pet food at Sh96 per Kilo”, she says.

Ms. Mbaya explains that initially, she used to spend a lot of money on the commercial feeds, but once she introduced the insect feeds to complement commercial feeds, there has been improvement on her chickens in terms of growth and also in increasing their egg production.

“I have reduced the usage of commercial feeds and this has seen a drop in the cost of buying the feeds by around 150 bags per month.  I used to purchase around 450 bags per month but now am using around 300 bags of feed on the same population of the birds,”, she said.

Mbaya notes that to farmers and young people wanting to venture into insect production for feed, they would not go wrong, since it’s a viable business.

“As millers complain of scarcity of feed, insects supplementing with feed, is not only sustainable, but can be integrated into farming as well,” Mbaya says.

Dr. Chrysantus Tanga from ICIPE and the project lead, says that through the project which started in 2015 and is now on its second phase, they provided training in BSF rearing and utilization of insect protein as an alternative animal protein source.

“The training has been scaled out to reach over 6,500 additional farmers and the market opportunities have developed to include the transformation of municipal waste into value-added, high-quality fertilizer, for enhanced crop production,” he said.

In addition to the 6,500 farmers reached, Dr. Tanga said that a separate group of over 1,300 farmers, have undergone a 5-day- hands-on incubation course, on all aspects of BSF farming and of those trained, 356 farmers, are already producing BSF at four sites in Kenya.

“Over 103 new insect-based enterprises producing up to 0.3-3 tonnes of fresh BSF larvae per week, have been successfully established,” he added.

In the counties of Bungoma, Kiambu, Nyandarua and Siaya, Dr. Tanga said four youth groups of 60 members each, have been engaged in the intensive training course on all aspects of BSF farming and have received additional training in marketing.

Besides  producing and selling insect larvae, he noted that the youths are  now leading in demonstration farms and learning sites in each county, as established by the project and are accessing an additional income source, by providing training to women groups, as well as other youths in the community.

Dr. Tanga said that insect -based animal feed, is unquestionably a growing market in Kenya, with high acceptance among farmers and feed producers.

He gave an example of feed millers, such as the UNGA Group, who are interested in integrating the insect feeds and require 40,000 tonnes every month, but haven’t gotten reliable source to be able to supply.

“There is a huge untapped market for the insect feeds in major companies, but for farmers too,” he said, adding that BSF harvesting is also proving important for livelihood resilience and is reducing production costs for livestock farmers, facing income uncertainty during these moment of Coronavirus pandemic.

Dr. Tanga called upon publication of supportive policies and standards around insect production, as an important step for the insect feed industry, which would help to further enhance awareness and adoption of BSF-based products.

He confirmed that three new standards on codes of practice, insect products and products containing insects, have been developed and approved by the Kenya Bureau of Standards (KEBS).

“As the popularity of insect rearing grows, the KEBS has approved new sets of standards, which has opened doors for entrepreneurs to commercialize their insect farming ventures.

Peter Mutua, the KEBS Food Standards Manager, says the standards, the first to be developed in Africa, are a milestone in supporting farmers and industry players, who are interested in farming insects.

“With this code of practice, insect farmers, harvesters and processing industries, can now get accreditation and their products will be issued with a KEBS certificate thus enabling them to sell their products in the local markets and beyond the country,” Mutua says.

The first standard came into effect in 2017 and detailed requirements for the production of dried insect products, as sources of protein for fortifying animal feeds and after research to explore other codes of practice, that would offer more opportunities for insect farmers, three additional standards were published in December 2020.

Looking to the future, Dr. Tanga said, the project will continue its research and development around other value-added products, including insect oils, as an additive to the animal feed, as well as in cosmetic soaps and the production of BSF chitin, for improved soil health and crop protection against pests.

Kenyan farmers have for a long time now been using fishmeal and soybeans as protein sources for their animals, which has become very scarce and expensive, considering that it does not produce high quantities of soya bean, but has been relying on importation from neighbouring countries.

The INSFEED research initiative, commenced in 2015 and is part of the Cultivate Africa’s Future Fund, a partnership between Australian Centre for International Agricultural Research (ACIAR) and the International Development Research Centre (IDRC),that leverages the strengths and resources of each organization, to improve overall food and nutrition security across Eastern and Southern Africa.