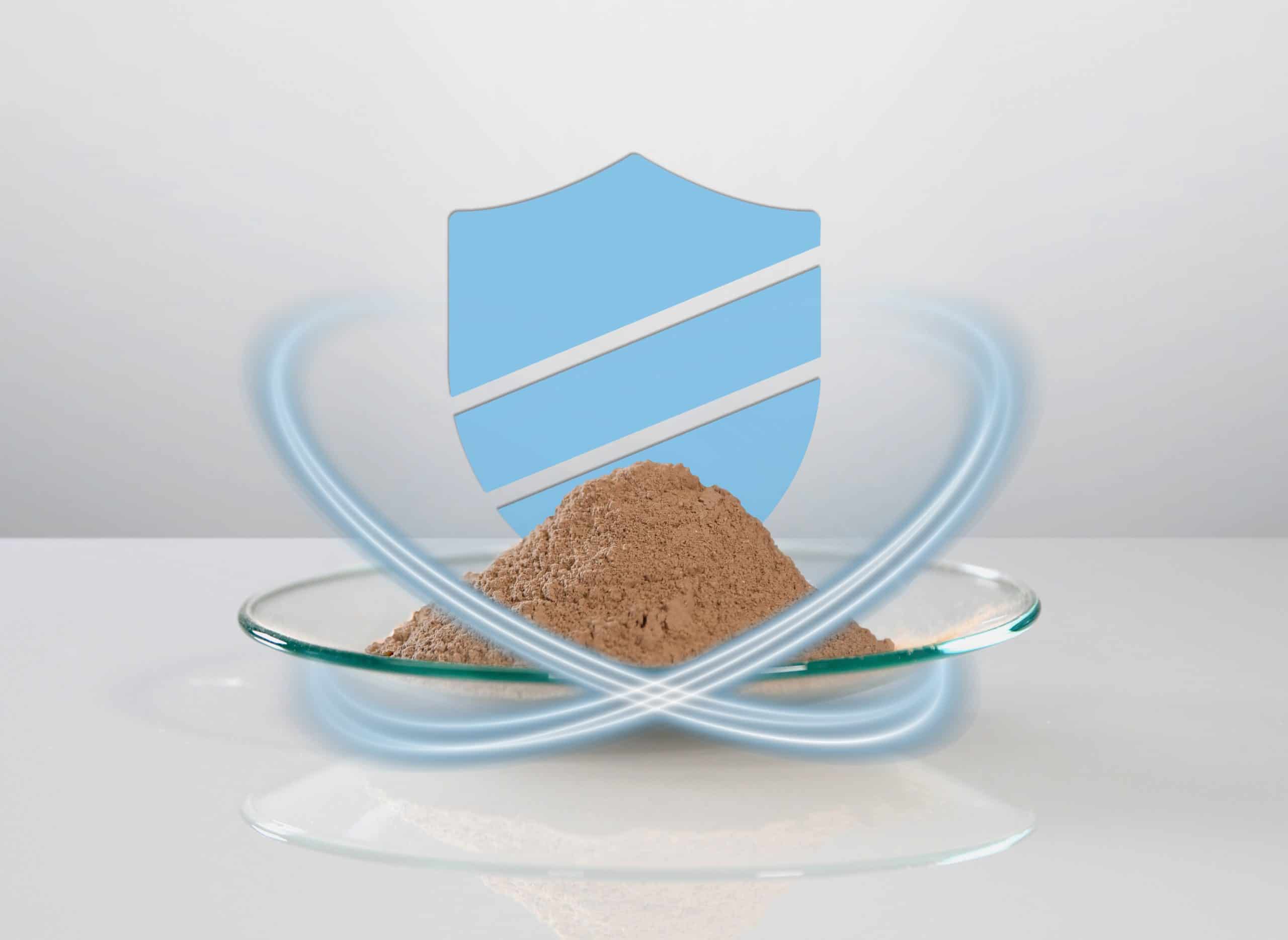 When high-performing livestock suffers from hoof and claw infections, ear or tail necrosis, liver disease, repeated inflammations and infections and diminished performance, it can most often be led back to the same cause: Endotoxin contamination. Endotoxins are frequently confused with mycotoxins which occur in contaminated feed. But Endotoxins are something completely different.

Endotoxins—it’s not the feed, it’s the gut

Rations high in starch and protein can lead to elevated endotoxin levels. Clearly, these rations are needed to meet energy and protein requirements for high performance. However, such rations lead to a change in the microflora of the gut or rumen toward gram-negative bacteria. As a result, Endotoxins are formed in the digestive tract of animals when these bacteria (gram-negative) replicate or die during the digestive process. . In addition, these intensive feeds damage the intestinal wall of the animals. Thus, the endotoxins in the intestine can be more easily absorbed through the intestinal wall and transported to the liver. If the amount of endotoxins exceeds the liver’s ability to detoxify them, the endotoxins trigger severe immune responses in the animals. As a result, clinical signs such as inflammation, liver damage and necrosis can occur and feed efficiency decreases by almost one-third.

Farmers often puzzle over what may be the cause of such symptoms as health deterioration, fever, lethargy, poor performance, high mortality, digestive problems, liver damage, a frail immune system, reduced fertility, inflammations and necrosis in their livestock. Research on the occurrence of endotoxins reveals that frequently they are the villain behind such damage. Recent studies indicate that young and high-performing animals are particularly susceptible to endotoxins. In swine, studies show that 50 to 100% of piglets are affected by tail, ear or claw necrosis from as early as their first day of life, which can be attributed at least in part to high endotoxin levels. And in the case of ruminants, where endotoxins cause laminitis and tail necrosis, as many as 90% of slaughtered fattening bulls have tail necrosis. Imagine the tremendous performance and health losses livestock producers could avoid in their animals if they were simply consistent in preventing endotoxins. An investment in endotoxin prevention is therefore always an investment in the farm with a direct impact on its profitability.

Successful prevention of endotoxin damages in high-performing animals requires a dual strategy: firstly, by preventing high endotoxin levels in the digestive tract and secondly, by treating chronic inflammation in the animal. Dr. Eckel’s new Anta®Catch combines both strategies. Its triple mode of action reduces the harmful effects of endotoxins across the board by reducing endotoxins in the digestive tract. In addition, its prebiotic ingredients strengthen the intestinal barrier and, finally, the phytogenic ingredients support the liver, counteracting excessive inflammatory reactions (Fig. 1). 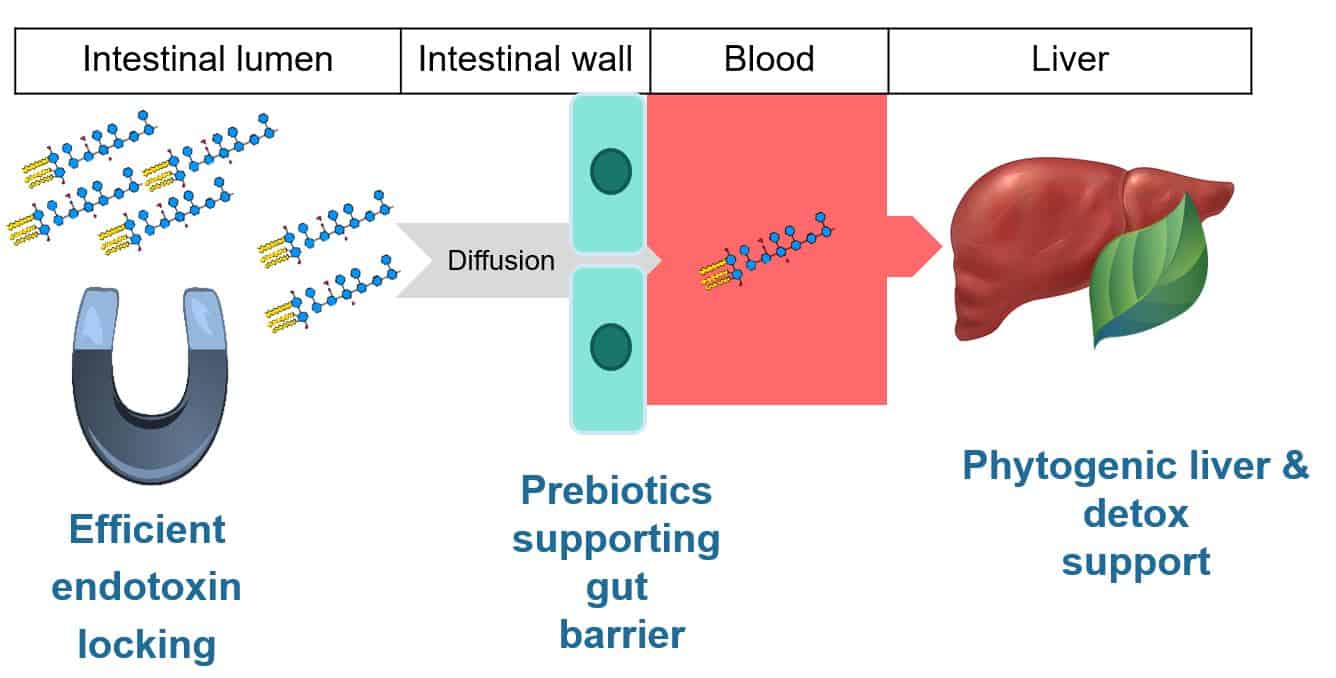 Anta®Catch is made from carefully selected raw materials that have been combined to provide the best protection against endotoxin-related problems. The product is activated in a unique process. This is achieved through rectification of the cations on the product’s surface, thus enabling Anta®Catch to immobilise endotoxins over a wide pH range, effectively catching a large amount of endotoxins in the animal’s digestive tract (Fig. 2).

In addition, the micronisation of the phytogenic ingredients in Anta®Catch improves the efficiency of their release and increases their effectiveness in protecting the liver by counteracting excessive inflammatory responses. Thereby, Anta®Catch protects poultry, ruminants, swine and fish effectively against endotoxin effects. This is an enormous step towards improving animal welfare and farm profitability.

Do you have any questions about endotoxins and Anta®Catch? Talk to us. We will be happy to advise you on how you and your customers can best apply Anta®Catch.

Like to learn more about endotoxins and their effects from an academic perspective?

Register here for our on-demand webinar with international specialist Professor Qendrim Zebeli, Chair of the Institute of Animal Nutrition and Functional Plant Compounds at the University of Veterinary Medicine, Vienna, to get an exclusive perspective from a leading specialist.