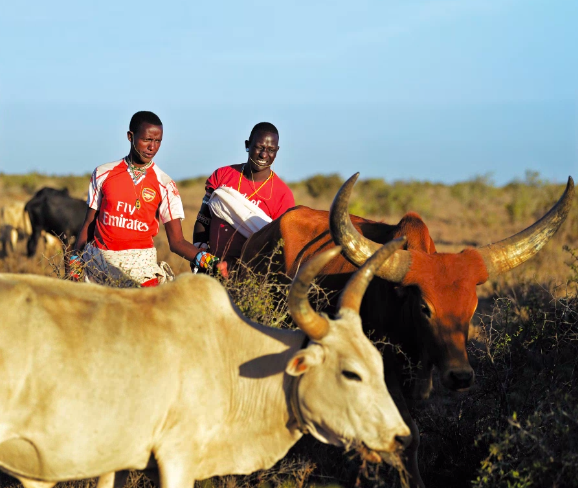 In a roadside bar in Nairobi, the smell of roasted meat wafts into the air as commuters make their way home from work. Served with cold beer and other accompaniments like the maize paste ugali, the dish is classic Kenyan fare known as nyama choma. At Njuguna’s Place, a choma-joint popular with office workers in the affluent neighbourhood of Westlands, the cooked meat is sold for around $12 a kilo.

Around 70% of all meat consumed in Kenya comes from 15 of its 47 counties, in the north and north­eastern arid and semi-arid areas. Unlike the industrial meat sector in countries like South Africa, much of the livestock in Kenya is tended by pastoralists and sold at local markets.

While meat fetches a higher price in the capital, especially in value-added forms like nyama choma, it can sell as raw produce for as little as $4 a kilo in the provinces. The level of poverty in areas where livestock is the primary source of income is around 30% higher than the rest of the country, and pastoralists often receive less for animals sold at local markets than they are worth.

“The people keeping animals are all poor, they are not getting value for their livestock,” says Abdikadir Mohamed, CEO of the Kenya Livestock Marketing Council (KLMC). “We need to improve livestock prices for the pastoralists. Once this is improved the poverty level will decrease.”

To negotiate a better price, the KLMC along with the Nether­lands-based Technical Centre for Agricultural and Rural Cooperation (CTA) and its partners are piloting the digitisation of two livestock markets in Kenya.

Previously, animals in the Merille Livestock Market in Kenya’s Marsabit County were subject to a visual appraisal to determine the weight. The “eyeball estimation” would lead to a barter discussion between the traders and the pastoralists to agree on a price. The livestock is now being weighed on electronic scales and this data is recorded along with the provenance, ownership and post-sale destination.

“This is basically to give the pastoralists informed data to negotiate,” says Frankline Agolla, co-founder of Kenyan technology company Amfratech, which is supporting CTA to provide technological solutions to pastoralists. “We need to be able to capture the prices of animals and the weight to say they are getting value for money. It is going to change how this market operates.”

The data is useful for regularising the sale of livestock in a region which is prone to cattle rustling and conflict over grazing grounds as climate change forces pastoralists to move greater distances in search of pasture. It also opens up the possibility for financial and technological products in a chronically underserved sector.

Amfratech has developed a mobile phone app called myAnga which delivers advice on weather and forage conditions to herders whose livelihoods are threatened by the increasing occurrence of drought.

In another data project, CTA is working with Nairobi-based Takaful Insurance of Africa to provide affordable weather-based insurance for livestock. The product, which insures around 20,000 pastoralists, compensates pastoralists before any climate-related disaster takes place whenever forage levels drop below a certain point.

According to data seen by African Business, around $1.2m passed through Merille Livestock Market last year in the lucrative yet undeveloped sector.

Abdullahi Ali is a trader who roams around Kenya’s northern counties as part of a collective which buys and sells up to 40 cows each week. Purchasing a cow in Merille Livestock Market for around $400, Ali can sell that cow for $430 in Isiolo just 160km away and for $460 at more than double that distance in Nairobi.

Yet his outgoings include hiring a truck to transport the cattle and paying hefty fees for a police escort in a region where roadside banditry is common. Any indent on his margin at the point of purchase could damage the viability of his trade. To overcome these issues, the KLMC is in discussion with slaughterhouses and traders to agree on a standardised price that is fair for all when buying from pastoralists.

“The livestock business is currently a liberalised business. It’s a buyer and seller agreement, but we need to bring in some norms,” says the CEO of KLMC. “We need to improve livestock prices for the pastoralists.”

By using weight to sell livestock within a determined price, pastoralists will be fairly compensated and also shielded from dramatic price fluctuations during the dry period between December and January, he adds. The KLMC is lobbying the government to legislate these changes.

Price controls are not without precedent in Kenya – in 2011, former president Mwai Kibaki signed into law a bill which gave the government the power to control the price of any essential commodity, after the practice had been abandoned in the 1990s in favour of economic liberalisation.

While the KLMC prefers to think of it as “fair trade” rather than price controls, its suggestions have been met with opposition from slaughterhouse associations and the Kenya Meat and Livestock Exporters Association, which remain strongly opposed to state intervention.

Kenya’s livestock sector also suffers from a lack of development and a dearth of sophisticated commercial enterprises, which prevent it from fulfilling its potential as a meat exporter.

With prime rearing conditions, and proximity to import-hungry Middle Eastern markets, Kenya should join neighbouring Sudan, Somalia, Djibouti and Ethiopia as a key exporter in the region.

Kenya meat exports were worth just $52,634 in 2017, which compares poorly with total exports of around $6bn, with tea, cut flowers, refined petroleum and coffee the most traded goods.

However, some progress is being made. The Export Processing Zone Authority is building an $18m livestock export quarantine centre in Tana River County which will subject animals to clinical and physical examinations before exporting them to the Arabian Peninsula and the Middle East.

The centre will be used to fatten and improve the quality of the animals which can then be sold at a better price. It is expected to earn Kenya $94m in foreign exchange earnings after three years and $469m after 10 years. Improving the livestock industry both at the point of origin and export would put Kenya in a good position to take full advantage of the lucrative sector.