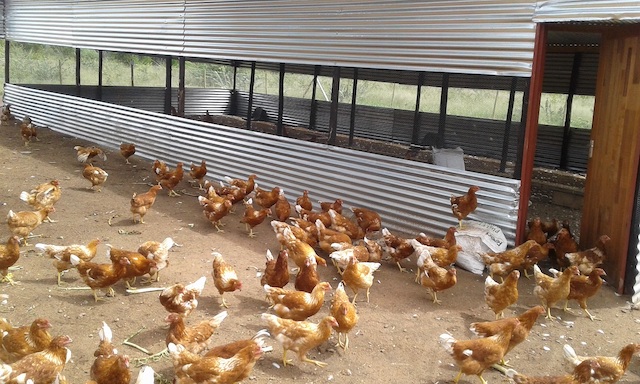 Broilers are white coloured chickens that are specifically bred for their meat.

These chickens are mostly sold in supermarkets and fast food outlets in units popularly known as ‘braai packs’.

Their meat is very tender compared to that of indigenous breeds. Broilers are reared in six weeks due to their good feed efficiency ratio of about 1,6 (meaning that for every 1,6 kilogrammes of feed consumed, one kilogramme of body weight is gained).

To achieve this (growth in six weeks) the chicks are fed on well-balanced commercial feed to meet their nutritional needs. Broiler feeds have high protein content which is reduced as the birds grow and also include other important elements such as fat, fibre, moisture, calcium, phosphorous and lysine.

There are basically two common types of broiler chickens – the Cobb 500 and the Ross chickens.

The Cobb 500 broiler chicken is the most common breed in Namibia with characteristics such as its yellow skin, the possibility of slaughter in 1,5 months and a high level of weight gain.

This breed is characterised by a white colour with dense feathers that cover the body at about four weeks of age. The bodies grow big to live weights of about 3 to 3,5kgs under good management. Cobb 500 chickens are docile and thus do not pose a threat to farmers or staff members.

However, the Ross chicken’s slower growth rate makes it tolerant to a host of poultry diseases that the fast-growing Cobb 500 finds difficult to cope with.

Broilers are produced intensively where they are provided with food and water ad libitum (at all times) through the use of both the battery cage and deep litter systems although the deep litter system is most preferred.

Under the deep litter system, chickens are raised on course concrete floors covered with wooden shavings or grass or straw cut to small pieces of between 5cm and 10cm which absorb droppings and water. To enable effective absorption, the leaf litter layer must be placed at a depth of about 30cm.

Farmers are urged to ensure that the litter layer is not damp or mouldy when placed on the floor and it must be sprayed with disinfectants to kill any micro-organisms.

This can be done while the chickens are in the fowl run.

Broiler producers are also urged to use untreated shavings for their poultry farming activities.

Farmers must ensure that chicks are supplied with artificial warmth during brooding either through the use of infra-red bulbs or charcoal drums.

For effective brooding, farmers must ensure the brooders are kept warm before the chicks arrive and that the heat source is proportional to the number of chicks.

After brooding, farmers must be on the lookout for diseases through placement of fly traps, foot baths and restrict movement between broilers of different age groups (bio-security).

Due to their poor immune systems, broilers are susceptible to diseases, so producers must also vaccinate the chickens and consult chick suppliers to know which diseases to vaccinate against.

Farmers must raise their broilers with the market in mind since the market is the one that will eventually buy the chickens. The target weights and packaging must all be done with market preferences in mind.

Between five to six weeks, farmers start selecting the large birds that are ready for slaughter and begin slaughtering them in batches to give the smaller chickens more time to feed and gain weight in the sixth week. It is important that farmers reach the market-desired weights which can help them to retain their market.

It is also important to ensure they pack their produce as desired by their target markets (1,5kg, 2kg, 3kg or whole birds).

Farmers may also make additional income from items such as chicken feet, necks, livers and hearts which can be packed separately and sold to low income markets.