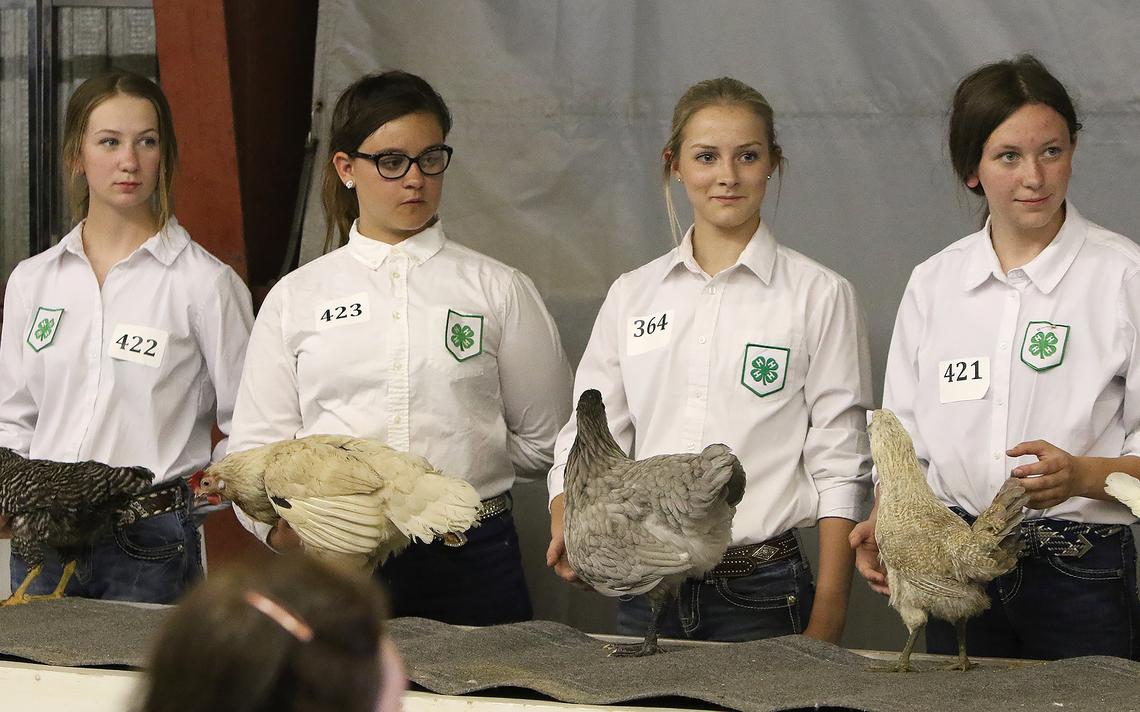 The Stutsman County Fairgrounds poultry and rabbit barn was a busy place Wednesday afternoon, bustling with birds of all shapes and sizes.

“I certainly missed the fair last year,” local 4-H member Lance Kjellberg said. “I know we did our best making up the shows but the fair is just a fun experience. There’s not much like it.”

The 4-H poultry show — encompassing chickens, guinea hens, pheasants, ducks, geese and turkeys — was followed by the rabbit show later in the afternoon. The llama and alpaca show rounded out the evening.

Kjellberg has been showing poultry for 10 years and was one of many 4-H’ers who collected blue ribbon honors for his flock. Kjellberg earned Grand Champion honors with his Black Jersey Giant cock. Kjellberg said he thinks his bird’s finish to his feathers and coloring appealed to judge Alan Kjerstad’s eye. Kjellberg also said that while the competition was stiff, his bird’s maturity stood out among the rest.

“I’ve been working with him a lot for a while, keeping him separate from the other chickens,” Kjellberg said of his award-winner. “He has good color and finishes to compete at the highest level. I think it just came down to age, body composition and genetics. It’s a good combination. He’s won a few awards today.”

Kjerstad said he first judges birds on confirmation and physical condition. Coloring follows the birds’ anatomical inspections. Kjerstad said the birds must show all three criteria on the judging day to receive honors.

“We’ve got a book over there and it’s the standard of perfection and that is kind of the guideline of what each breed should look like,” Kjerstad said. “You are trying to see what bird conforms to that standard the closest. It’s a good exhibition — they are all nice and healthy stock.”

Cassidy Williams, another 4-H grand champion, has been showing poultry for the past four years. William’s prize chicken, Stevie, has been a frontrunner in the poultry contests since 2017 but another one of Williams’ birds caught Kjerstad’s eye this year.

“I showed a lot today,” Williams said. “Stevie is my best every year but I got my Grand on my three laying hens. They lay the most eggs, they were big enough and they were pretty much the same colors.”

Williams went on to show rabbits and alpacas later in the day. The local 4-H’er will go on to show dairy, sheep and goats before the 4-H contests conclude on Saturday. While Williams has got multiple eggs in her basket this week, Kjellberg said there is something special about showing off the birds.