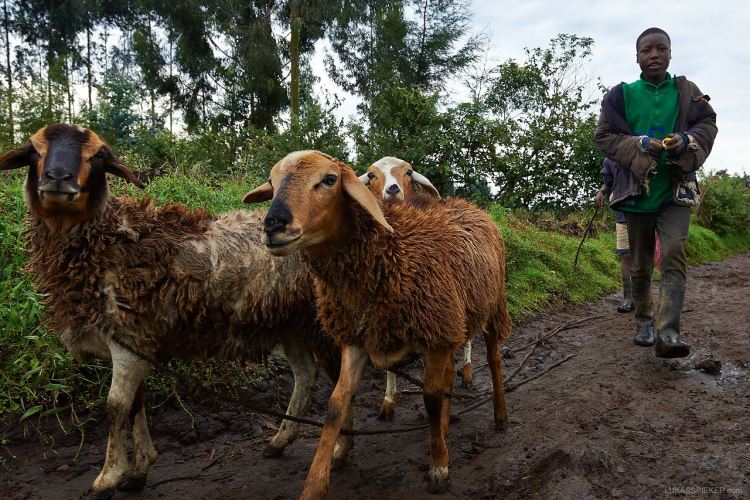 Rwanda has been recording a decline in the sheep population since 1992, making it the only domestic animal in the country to have reduced in number over the past three decades.

The decline, according to some people can be attributed to the cultural changing cultural norms as well as the drive towards professional farming.

Generally, grilled meat including chicken, pork, beef and goat — is a popular choice among Rwandans—but many dislike mutton. Some say it gets extremely cold a short while off the fire, much faster than other types of meat.

Traditionally, cattle keepers were fond of keeping sheep within their herds, with a belief that the animal was a source of good fortune.

Despite their love for the animal, none would eat mutton.

There’s a slight shift from this mindset as mutton is now becoming a delicacy among some section of Rwandans.

Yet, the number of sheep in the farms continues to decrease as livestock farmers turn to goats and pigs, which they say give them a decent income.

Those were decades ago, she stated.

Theogene Nyagatare, 69, says that he first tasted mutton in 1958, although not from his parent’s family where it was considered a taboo.

“My family could never prepare it, I only ate it at Bitana’s, our neighbours,” he said.

For me, he added, mutton is even better red meat compared to goat.

James Cyiza, a goat farmer in Rwimbogo Sector in Gatsibo District has 120 animals on his farm.

His choice for goat farming is purely economically motivated rather than cultural.

“Sheep used to generate little money. However, they are getting more expensive these days, but there are still very few sheep farmers in our area,” he stated.

Unlike in the Eastern Province where goats thrive because it tends to get dry, the Western Province, which is cold, is suitable for sheep farming.

Dr Ernest Nsigayehe, Director of Agriculture in Gatsibo District, said that the district has a population of 5,116 sheep–far outnumbered by that of goats at around 90,797.

In addition, under the six-year District Development Strategy (DDS), which runs from 2018-2024, the district targets to distribute some 11,100 goats to poor families.

There are no particular plans to distribute sheep.

“People look at what gives them more money and goats generate more money than sheep,” he explained.

This is significantly different from Rubavu District in the Western Province where the number of goats and sheep is almost the same.

Rigobert Bayingana, the Director of Agriculture in Rubavu District, says that more than 2,000 smallholder farmers in the district were given goats and sheep during this fiscal year 2020-2021.

The high demand for “all kinds of meat” in the neighbouring DR Congo is also an added advantage for sheep farmers in Rubavu.

Dr Théogène Rutagwenda, the Director-General in charge of Animal Resources at the Ministry of Agriculture and Animal Resources, says that recent developments in the livestock sector have also had an impact on the number of sheep stocks.

“There is a sheep breed improved for wool production that thrives in cold areas like Musanze and Nyabihu districts. When you keep an improved breed, the number of sheep is usually lower than when you do local breed. That should be noted too, the productivity does not depend on the number of the sheep,” he explained.

Technically, Rutagwenda says, the feeding behaviour of sheep is difficult in most parts of the country; goats adapt easily to harsh weather conditions

Similarly, cold and rainy areas in the Western Province tend to be difficult for goats.

For Jean Pierre Sibomana, a barbecue chef at a popular restaurant and bar in Rwamagana District, customers prefer grilled goat meat even as most of them can’t differentiate it from mutton.

As a result, Sibomana says, some chefs grill mutton and serve it as goat meat, making more profit in the process because mutton is cheaper.

Generally, mutton is one of the world’s favourite red meat, hailed for being a great source of essential minerals, loaded with protein and healthy vitamins.

Rutagwenda said that in high-end hotels in many countries across the world, lamb is the most popular meat.

However, its consumption in Rwanda remains low even as the country continues to attract high-end hotel brands, which are in part attracted by the focus on conference tourism.