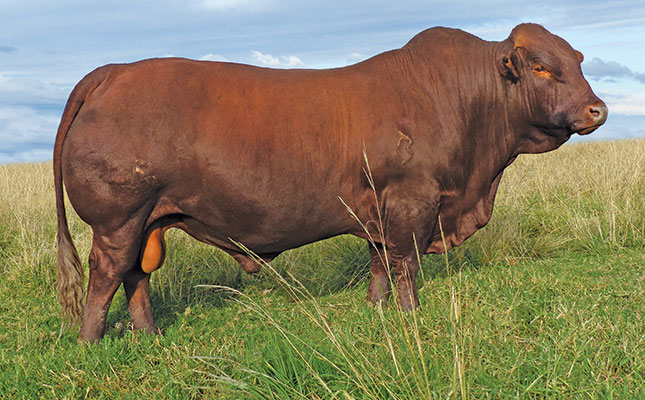 Logic seems to dictate that some livestock producers must suffer buyer’s remorse after purchasing an animal for an eye-watering price. Glenneis Kriel asked a few farmers whether their record-breaking acquisitions have paid off, and found the answer to be unanimous.

In 2014, a Dorper ram, Bolt, made history when Mickey Phillips sold it to Martin Compion, who farms at Lonziekvlei in the Northern Cape’s Bushmanland, for R600 000.

The purchase, which took place at the Upington National Dorper Sale, represents the highest price ever fetched by a Dorper, and one of the highest prices paid at a public auction for any sheep breed.

Compion remembers the auction as if it were yesterday.

“It was a tough purchase. Two Namibian consortiums were the main contenders, chasing the price up to R400 000 before I joined in the bidding.”

The purchase, however, did not work out the way Compion had envisaged.

“Buying Bolt for such a high price made sense, because I managed to negotiate a deal to sell embryos to a Brazilian consortium. The consortium, however, went behind my back and decided to rather buy embryos from the original owner, who still had a reasonable supply of Bolt’s semen.”

The Brazilian deal fell through, and Compion ended up selling Bolt back to the original owner a month later at the same price he had bought the animal for! But during that month, Compion used Bolt for the laparoscopic insemination of some of his stud ewes and also collected a thousand semen straws, of which he still has some left.

Dorper rams have never again fetched such a high price. This, says Compion, is primarily because of movement restrictions preventing Namibians from buying live animals in South Africa.

But despite the enormous sum he paid for Bolt, he is convinced that the animal has been worth every cent.

Bringing balance
Compion’s father, Martin Snr, played a major role in establishing the Dorper industry in Namibia, each year selling an average of 150 sheep at three auctions, of which two were hosted in Namibia.

In 2002, Compion bought 30 ewes from his father after his father downscaled production for health reasons, and three years later he launched his Compion Dorper stud with 50 ewe offspring of the World Champion Dorper ram of 1996, Chips.

In 2010, Compion bought the ram Bakgat for the then record price of R300 000, and this animal went on to play a major role in his stud.

“Chips built a solid foundation for the stud, whereas Bakgat helped improve fertility and reproduction,” he explains.

Bolt, he adds, brought balance by siring larger-framed sheep with more body fat that enabled them to thrive under very dry extensive conditions, as found in the Kalahari and Boesmanland.

Hantam and Namaqualand, by contrast, are winter rainfall regions with higher precipitation and hence better grazing. Farmers here prefer an animal with less body fat that does not get overfat on the plentiful grazing in winter.

While admitting that Bolt is a remarkable ram, Compion says that he has never been as fertile as Bakgat.

“Bakgat could be left with 80 ewes, and 79 of them would have been serviced after 34 days, and that was under normal veld conditions.”

In contrast, some of Bolt’s offspring have had such low semen counts that their semen could not be frozen.

Success, explains Compion, has come from bringing the Bakgat and Bolt lines together. In fact, it is revolutionising not only his stud, but the entire industry, as it has resulted in “quite a few exceptional Bolt sons, such as New Bolt and Champ, both of which are used in the stud, and for the first time compare well with both Bakgat and Bolt in build and fertility”.

Mr Million
In 2011, Boran breeder Ockert Werner bought a Boran bull for a record-breaking R1 million at the National Boran Auction in Parys in the Free State. The seller was Stephan Johnson of Frontier Boran in the Eastern Cape.

Unsurprisingly, the bull became known as ‘Mr Million’. Werner, who farms near Brits, purchased his first Boran bull in 2006 to use on his commercial cattle herd.

He was so impressed with the resulting calves that he decided to start his own stud, Model Borane, and to this end bought a large number of Boran offspring from Simon Hodgson, one of the first Boran breeders in South Africa.

Werner was more than satisfied with his purchase.

“A remarkable bull should never be underestimated, as it immediately improves your herd by 50%. I experienced this first hand with Mr Million. Besides this, I paid for the investment in only a couple of years, thanks to sales of semen and offspring, with plenty of Mr Million’s progeny going for more than R100 000 each.”

Werner also highlights the bull’s gentle temperament, with the animal even allowing him to scratch his head.

“This is one of the great qualities of Boran cattle; they’re extremely easy to manage.”
After the bull had produced more than 700 offspring, Werner wanted to give it a royal retirement in a camp near his house, but sadly, stock thieves struck last year and maimed the animal before being disturbed and fleeing. Mr Million had to be put down as a result.

Group buying
One of the highest prices ever fetched for a bull in South Africa was R1,8 million, paid for a Bonsmara bull in 2018. The animal, LAR 14 173, was bought by a consortium of Bonsmara stud breeders at a private production auction of Derek and Tutu Ralfe of Up George Bonsmaras, who farm near Dundee in KwaZulu-Natal.

Benjamin Bosch of Benansa Bonsmaras near Bothaville and Paul Maré of Paul Maré Bonsmaras near Viljoenskroon heard rumours of Up George’s outstanding bull and decided to inspect for themselves three weeks before the auction.

“The bull was exceptional,” says Bosch.

“It had achieved five stars in its performance evaluation and nine points out of nine for its visual evaluation, both of which were way above the breed averages. It also came from a remarkable lineage of animals on both the maternal and paternal sides, and had already produced impressive calves.”

The two farmers saw the bull as a ‘curve bender’, as it was early maturing, but with breeding values that compared well with those of larger, later-maturing bulls.

They soon heard, however, that other players were also interested in buying the animal and realised that they would be unable to afford it on their own.

“Paul and I host our production auctions together and have bought animals together in the past, so creating a larger consortium to buy the bull was not a big shift to make,” says Bosch.

“Consortium buying isn’t new. For the past 10 years or so, farmers have used it to make high-value animals more affordable for the individual buyer, while driving up prices, resulting in better rewards for breeders.”

Initially, the group committed to pay R1 million for the bull, but they revised this upwards based on the maximum that each member was prepared to contribute. On the day of the auction, LAR 14 173 was sold in less than 10 minutes.

“It was like a beehive in there. We could only get our first bid in at R1,5 million,” Bosch recalls.

Since then, shares in semen have also been sold to Martiens Aveling and Chris Krugel, and the animal has been registered as an artificial insemination bull. Semen has not yet been made available on the market, however, as the owners want to take full advantage of the genetics first.

“I’ve sold some shares of the bull’s first offspring, resulting in my investment already starting to reap a profit,” says Bosch.

The group only uses the bull for artificial insemination and not live covering to prevent injury and reduce disease risk.

Bosch does not foresee a Bonsmara bull fetching such a high price within the next three to five years, as LAR 14 173 has been an outlier that has taken over 30 years of strategic breeding to create. Prices of R600 000 to R900 000 for a Bonsmara bull, however, should not be uncommon.