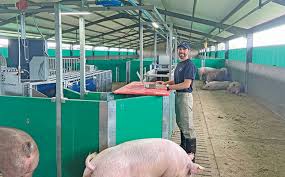 CP Kriek and his wife Gerda swapped their industrial engineering careers for farm life in 2012 with the purchase of Bloubank Estates, the holding company for Taaibosch Piggery.

“As engineers, we love challenges and taking things that aren’t working optimally and making them better,” says Kriek, who grew up on a farm.

The Krieks have worked hard to bring their farm up to European standards, implementing group housing and an electronic sow feeding system. This has dramatically improved animal and herd welfare on the farm, and has also resulted in improved productivity.

Taaibosch Piggery, near Fochville in Gauteng, comprises four sections: a 2 200-commercial
sow breeding and nursery unit; a weaning unit; a growing and finishing unit; and a genetic
nucleus. An on-farm gene transfer centre provides fresh semen to the breeding unit on a
scheduled and on-demand basis.

In addition, the operation has a 80-sow stud, which is due to be increased to 250 animals by June. Kriek uses a crossbreeding system with Large White, Landrace, Duroc and Piétrain
breeds. The first two have excellent maternal traits.

“The Large White is a double-purpose breed and makes a good Landrace F1 cross in commercial herds,” he explains.

“Duroc boars provide good meat quality, growth and marbling, so we use them on our F1 sows.

“The Piétrain is a good terminal breed, as it provides high carcass yield and muscling. In addition to the pure terminal boars, Taaibosch composite terminal boars are used extensively on F1 commercial sows.”

Group housing
When Kriek took over the piggery, much of the infrastructure was geared to individual management of sows with single crates. Adhering to European legislation, he started converting to group housing.

“This promotes animal welfare and healthier sows, and we’ve seen an improvement in production since converting,” he says.

The South African Pork Producers’ Organisation has adopted the principle of keeping sows in individual crates for eight weeks, and in groups for a further eight weeks. Kriek, in contrast, places his animals in groups for the full 16 weeks.

“This has given us global market access as well as wider market access in South Africa, because some of the local supermarkets already demand this,” he says.

Converting the old buildings was not easy, and adjustments in management had to be made.

“You need to be a far more proficient stockman to manage sows in groups than as individuals,” explains Kriek. “Initially, the system is new for the sows too, so they also have to get used to it.

“The groups have animals with different temperaments, which can result in fighting before they adapt to a hierarchy.”

As pigs are curious and like exploring, Kriek places hay racks in the group pens; the sows pull the hay apart and chew it.

“It’s a form of entertainment for them and something to help ease any frustration they experience,” he notes.

Management
Sow behaviour needs to be observed carefully, he explains.

“We look for outliers and those that don’t fit in. If seven sows are lying down peacefully and one is walking around in agitated manner, that sow needs attention as she may be in heat.

“Pigs are easier than most animals to understand as they’re so vocal. You can identify a great deal simply by listening to the noises they make. This is important, as the turnaround time is short.”

If something is missed, it can affect breeding later.

“Initially, we had a slight dip in production when we switched to group housing due to the learning curve involved, but we’ve more than made up for it since.”

The fact that pigs are intelligent can be used to the animals’ and the farmer’s advantage.

“Knowing how they behave means we can use this knowledge in the design of the buildings and systems, so we can work with the pigs, not against them,” explains Kriek.

“They’re herd animals and have a strong social hierarchy; they’re most content when they are together. When you walk into a building and see eight sows cuddling and grunting next to each other, then you know you’ve got it right.”

In addition, Kriek has found that his pigs are healthier because they can move around.

“Being fitter means they’re in a better condition when they go to the farrowing house and are better prepared for farrowing. More piglets are born alive and healthy.”

Selection
Gilts are initially selected for breeding at 10 weeks of age, then performance-tested and separated according to weight and body condition. Young gilts are raised in a gilt-rearing building with a specific ration formulated for development and defined growth curves.

At 19 weeks, all animals are individually weighed, tested and evaluated. The selection data is recorded and used in future performance testing and for establishing selection criteria and estimated values.

When they are between 24 and 30 weeks of age, the gilts are exposed to a boar to enable heat detection. After this, Kriek and his team start more intense breeding preparation.

“Ideally, the entire group should come into heat at the same time so that we can breed at 33 weeks,” he says. “Some gilts come on heat earlier, but in our experience, those that are more mature perform better during their life cycle.”

On the Thursday before planned mating, the gilts are moved to mating crates, where they are fed a flush ration to prepare them for mating.

On the Saturday morning, they are given intensive boar exposure, and by Monday they are usually in heat. They are then artificially inseminated twice between Monday and Thursday.

Kriek has found artificial insemination (AI) to be the best method for his herd.

It is more hygienic, saves time (more sows can be inseminated with an AI boar), and results in less stress and fewer injuries. It also expedites genetic improvement in the herd as the semen of the best boars can be used on more female animals.

After the second insemination, the gilts and sows are moved to a group house in the evening so they can settle in quickly, eat, sleep and wake up the next morning adjusted to their surroundings and each other.

Farrowing and weaning
The animals remain in the group house for 16 weeks during gestation and are moved to the farrowing house five days (or even fewer) before their expected farrowing date.

Taaibosch has a farrowing rate of 92% and the piglets are weaned at four weeks at an average age of 28 days. They are grouped according to weaning weight and sex, and groups of potential gilts are selected at this stage.

The weaned piglets are kept at a separate weaning site that has access control and follows strict biosecurity control measures.

After six weeks, the piglets are sent to the farm’s grower and finisher site. Here they undergo another round of selection and a group of 48 is chosen to go to the gilt-rearing house. Terminal animals are sent to grower houses and kept here until they are ready for market at 19 weeks old, by which time they will have achieved a carcass weight of between 83kg and 88kg.

Kriek applies an individual number to each animal to ensure lifetime traceability. It also aids in performance testing and helps him in his slaughter planning, as the animals are weighed and measured individually.

Taaibosch boars are chosen for breeding from the herd. At 19 weeks of age, the top boars are selected for further performance testing and the best one is placed in a boar selection programme where he is tested and evaluated against current breeding boars.

If he outperforms a current breeding boar, he replaces the latter and undergoes progeny testing. If he proves successful, he is listed as an AI breeding animal.

Although this is a lengthy process, it is an accurate one, says Kriek.

Technology
Kriek has embraced technology to manage the farm more efficiently. A good example is the electronic sow feeding system on the stud farm, which has eased individual management of the animals.