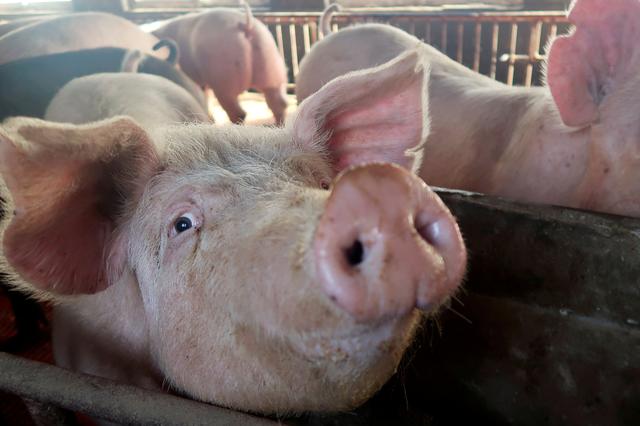 China’s wheat feeding to pigs and poultry has dented demand for alternate feeds and clouded the market outlook for soybean meal and other key ingredients used by the country’s massive feed sector, analysts and traders said.

Chinese feed producers have sharply raised wheat purchases in the past several months to replace corn, which has rallied by more than a third in the past year to a rare premium over wheat following a drop in corn output and state stockpiles last season.

Greater feed use of wheat, which has more protein than corn, has also cut demand for soymeal, the main protein source in livestock rations, putting further pressure on crushing margins.

“Demand for soymeal is in general quite bad. It is recovering, but very slowly,” said Zou Honglin, an analyst with trade website Myagric.com.

“One reason is African swine fever, the other key factor is large-scale substitution of wheat for corn in feed,” Zou said.

China is expected to use up to 40 million tonnes of wheat for feed in the 2020/21 crop year that started in June, replacing roughly the same amount of corn and also displacing more than 4 million tonnes of soymeal, according to two sources.

Corn is expected to remain the primary feed grain in China, with roughly 185 million tonnes of corn expected to be fed to animals this year as the livestock sector tries rebuild its mammoth hog herd following deadly outbreaks of African swine fever first detected in 2018.

But tight corn supplies and high prices have spurred feed markers to find alternatives where possible.

Corn prices in Shandong province, a major hog producing area, have held a premium over wheat since October, and now stand around 17% above wheat.

“It would make economic sense to use wheat (to replace corn)when wheat price is 50-100 yuan above corn. Now wheat is even cheaper than corn, so of course you’d substitute,” said a purchase manager with a major poultry producer based in northern China.

The percentage of soymeal in his firm’s self-produced feed has fallen to 20% from 23% after they started to use wheat to replace about 15% of corn in the ration.
CRUSHING MEAL DEMAND

Large-scale substitution of wheat for corn in feed has depressed the proportion of soymeal in both pig and poultry feeds with the drop ranging between 2% to 7%, across the country, analysts and crushers said.

In some areas of northern China, the soymeal percentage in poultry feeds has fallen to 15% from 24% previously, said a soy crusher based in the region.

The ongoing wheat substitution is expected to continue for several more weeks as many feed producers have built up wheat stocks through May, traders and crushers said.

“Under current estimates, another 30-40 million tonnes of wheat would go into the feed sector in 2021/22,” said a manager with a major wheat trader.

“But the volume should decline as the government strengthens intervention,” he said, in reference to recent measures taken by authorities to restrict wheat purchases from state reserves and raise minimum auction prices.

The new wheat harvest in June will also influence the market.

“In the end, it all comes down to prices. If corn prices remain high, and it is profitable to use wheat, we will keep using wheat,” the manager with the poultry producer said.
MORE BEANS COMING

“Crushers will be under a lot of pressure in the coming months. Much depends on whether demand would catch up,” said Xie Huilan, analyst with consultancy Cofeed.

Under current prices, Chinese crushers would lose 50-200 yuan for each tonne of soybeans processed in the coming months, according to crushers and analysts.

Soybean crush margins in the country’s key oilseed processing province of Shandong slid into negative territory earlier this month for the first time since March 2020. On Friday, they stood at -40 yuan per tonne.
Source: Reuters (Reporting by Hallie Gu in Beijing and Naveen Thukral in Singapore; editing by Gavin Maguire and David Evans)

CEVA LAUNCHED SOW VACCINE AGAINST NEONATAL DIARRHOEA WITH 7 ANTIGENS INSIDE