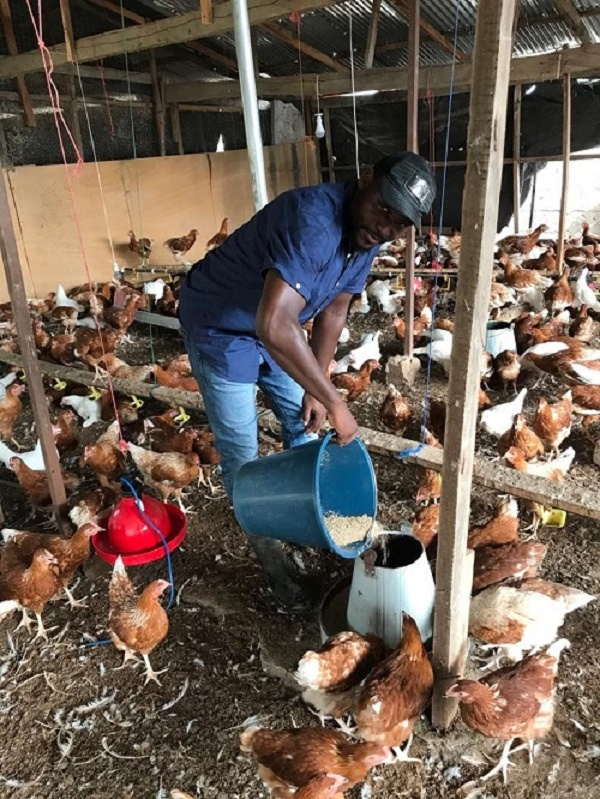 Success is for the daring. It is only those who are ready to press on in life that can succeed in any endeavour. That is what has accounted for the success of a young poultry farmer in Tamale, capital of the Northern Region in Ghana.

He started life as a trained teacher but later found love with birds and decided to switch professions. Find out as he shares his story with the B&FT how he is keeping his business afloat despite the threat of coronavirus.

Yahaya Abdulai is a product of the Ghana Senior High school in Tamale, where he studied science. From there, he moved on to the Tamale Training College where he gained training as a professional teacher.

After teaching for a year, he took a study leave to study for his first degree at the University for Development Studies. He graduated with a degree in Agriculture Technology.

He followed with a second degree in Agriculture Economics. And currently, he is in the final year of his PHD in the same programme.

The whole poultry farm idea came when he was taking his second degree in 2014.

He decided to put into practice what he was learning. To raise capital for the farm, he went for a loan of GH¢6,000 and used half as part payment of his fees and the other half he invested into the poultry farm – with the thinking that he would be able to recoup the GH¢3,000 to pay for his fees in the second year.

Unfortunately, he counted his chicks before they were hatched. Things didn’t go that well for him as there were other risks he didn’t know of. The good thing is that he didn’t quit. He continued the business with just 200 birds, and borrowed some money from family and friends to inject into the farm.

With that little investment and prudent management, he was able to increase the birds to 500. Favour found him and he got a grant from an NGO – and doubled the number of birds with that investment. Currently, the business has progressed to a point where he has 4,000 birds in stock.

AY Farms, which is the name of his business, also supplies 800 broilers every two months to a company; and also produces 1,000 crates of eggs every month. His main markets are schools, restaurants, hotels and the market women who buy them in bulk to sell.

In the next five years, AY Farms wants to be the largest poultry farm in all the regions of northern Ghana – and even expand to other parts of the country.

To ensure business continuity, he plans to engage the services of other professional to manage the business. Currently, he is doing so with his wife and six other people; but in the future when the business becomes large, he plans to bring in qualified persons to run it so as to ensure its continuous existence.

Yahaya’s challenges are not new to what all poultry farmers in the country face. Poultry farmers operating at his scale and beyond rely on imported feeds, as they are the ones that have the right formula to make the birds grow healthy.

And due to the fact that they are imported, prices are always going up because of exchange rate volatilities. Yahaya says the cost of feed alone takes almost 70 percent of his total costs.

Another challenge poultry farmers experience is the mortality rate of birds in the event of any disease. Once a disease attacks a bird, it spreads to the others quickly – and that becomes a loss to the farmer.

Also, another challenge is competition with imported chicken, because it is cheaper than locally produced ones due to the high cost of production incurred by farmers in the country. This creates unfair competition for the local poultry farmers.

Financial constraints cannot be left out of the problem. Due to the high-risk nature of agriculture, most financial institutions do not want to lend to players in the sector for fear they may not be able to pay back.

How the coronavirus pandemic has affected business

The pandemic, Yahaya says, has worsened the challenges highlighted above. In addition to that, the market for poultry has shrunk due to closure of schools, hotels and restrictions on social gatherings. This has significantly reduced revenue that comes in every month, starving the business of very necessary capital.

Again, because of the closure of borders, day-old chicks and the feeds that are imported from outside have not been able to come in.

How AY Farms is coping with the challenges

To continue operating even amid the pandemic and its associated challenges, he has turned to local solutions. He now uses soya beans to prepare feed for the birds; and has teamed up with another local entrepreneur who uses larvae to make protein for fish and bird feeds.

To also make up for losses coming from the egg glut, he has reduced the prices to encourage buying from consumers in the community, at least to break even if they won’t make profit. The number of broilers they are producing has also been cut by about 70 percent – all in a move to keep the business running till things return to normal.

How the GCIC has helped

Yahaya says the Ghana Climate and Innovation Centre (GCIC) is supporting his business to implement the concept of organic poultry farming. Also, the GCIC has provided his business with funding of GH¢100,000 for the farm’s expansion.

The impact of education

For Yahaya, his education, especially in agriculture, has been of great help to him. He has the needed knowledge to manage the business by himself. Again, the training he got from business plan competitions he partook has helped him to write his own business plan and pitch it to investors without engaging the services of a professional.

How government must support

If the youth are to be attracted into agriculture, Yahaya says, there must be enough motivation from government. He thinks there should be an Agriculture Fund that would be a source of funding for every youth who wants to go into agriculture. That fund, he added, should be free of politics so that it doesn’t become available to only party followers of ruling governments of the day.

Beyond the funding, he says, market access should also be created by government so that those who enter into agriculture wouldn’t have to bear the headache of who or where to sell to. This would ensure price stability for farmers, he said.

“Business comes with a lot of challenges, but I would still advise young people to consider entrepreneurship. If you put in the structures and you work on them, you are going to succeed. And if you do start a business, look for different sources of funding. Open up your network as much as possible and you will get other people who are interested to support the business.”