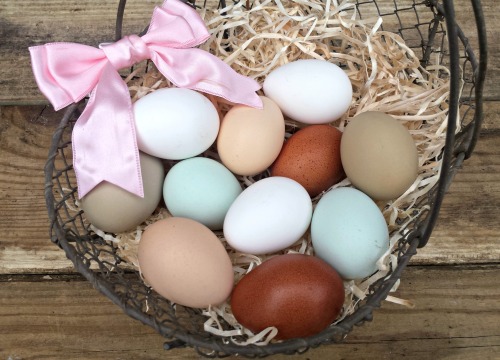 Have you ever been curious about why chicken eggs can be different colors? While most eggs are white or brown, they also come in colors like cream, pink, blue and green. In addition — and this is no “yolk” — some are even speckled.

Nature has provided chickens with diverse color patterns for their feathers, skin patches and eggshells for various purposes, including camouflage, protection from predators and to signal individual identity.

According to a Texas A&M AgriLife Extension Service poultry specialist, the color of an egg is mainly determined by the chicken’s genetics. That means the breed of hen will usually indicate what color of egg will be produced.

But appearances aside, all chicken eggs have no major differences in taste or nutritional composition.

“Generally, hens with white earlobes will produce white eggs,” said Gregory Archer, Ph.D., AgriLife Extension specialist in the Department of Poultry Science, Bryan-College Station. “But all eggs start out white because the shells are made from calcium carbonate. They get their color from the hen’s genetics as the egg forms.”

Nature has its own way of coloring eggs, and it doesn’t require boiling water, food coloring or paintbrushes. Different eggshell colors come from pigments deposited onto the shell as the egg forms in the hen’s oviduct. The oviduct is a tube-like organ found along the hen’s backbone between the ovary and the tail.

A chicken yolk, or ovum, forms in the hen’s ovaries. A fully formed ovum leaves the ovary and makes its way into the oviduct. There, it goes through a five-stage process to help ensure the yolk makes it safely to the outside world. The entire egg-forming process usually takes a little more than 24 hours.

It’s during the fourth stage of this process involving the shell gland that pigments are deposited onto the shell, producing its color. So, in short, different breeds of chicken deposit different pigments on the shell as it forms, changing its exterior — and sometimes its interior — shell color.

White Leghorn chickens lay white-shelled eggs and breeds like Plymouth Rocks and Rhode Island reds lay brown-shelled eggs. The shells are brown because a pigment known as protoporphyrin is deposited onto the shell. But because this happens late in the process of shell formation, the pigment doesn’t penetrate the shell’s interior.

Different chicken breeds lay eggs in different colors or shades. The darker the feathers, the more likely the hen will lay a brown or darker-colored egg.

“This is why when you crack open a brown egg, you will see the interior of most of the shells remains white,” Archer said.

A pigment called oocyanin is deposited on the egg of the Ameraucana breed, penetrating both the exterior and interior of the shell and making them blue. Other breeds such as Araucana, Dongxiang and Lushi lay blue or blue-green eggs.

An olive egger results from a cross between a hen and rooster from a brown-egg-laying and a blue-egg-laying breed. The hen produces a brown pigment that penetrates the blue shell of the egg, resulting in a greenish-hued egg. The darker the brown pigment, the more olive-colored the egg appears.

Other chickens that lay colored eggs include the Easter egger, barred rock, Welsummer and Maran, with the color of the egg depending on the breed and its genetics.

As it turns out, the speckles on speckled eggs are just extra calcium deposits. One reason for the speckled-egg spectacle is that speckles are formed when the egg-shaping calcification process is disturbed. Another possible reason is a defect in the shell gland. Then again, it could result from excess calcium in the hen’s system.