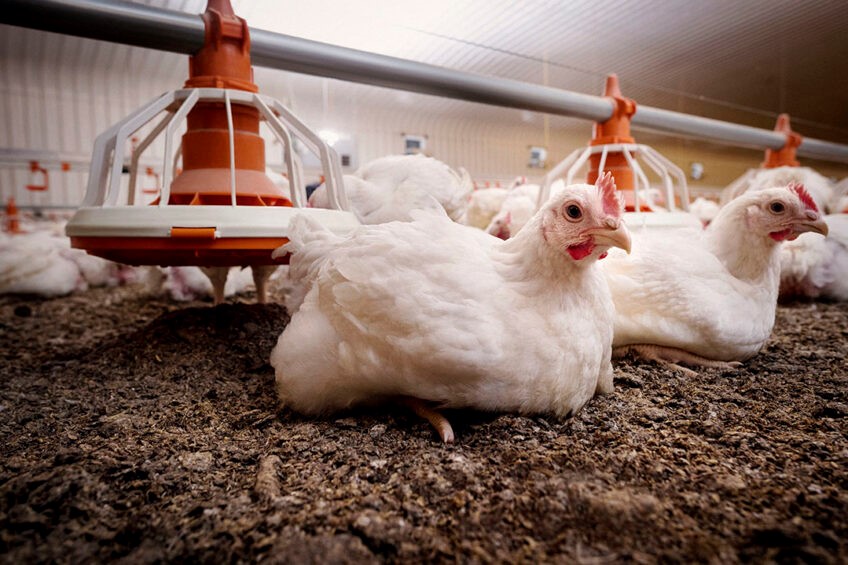 Effective functionality and health of the gastrointestinal tract are important factors in determining animal performance. There are relationships between diet, the gut barrier, gut microbiota, digestion and absorption, as well as with immunity. Excessive bacterial cell wall fragments, mainly peptidoglycans, may impair gastrointestinal functionality and reduce performance.

Bacterial cell walls mainly consist of peptidoglycans (PGNs) which are mesh-like in structure. Naturally, during bacterial turnover, a large quantity of PGNs fragments are released into the gut. Most of the PGNs are recycled for cell wall biosynthesis but they can also accumulate in the intestinal lumen, impacting gut functionality. PGNs are recognised by specific receptors located in the basolateral surface of epithelial cells, inducing inflammatory and immune responses.

As the gut and microbiome are developing, poultry face a range of challenges from the diet and the environment. Those which cause significant damage to the intestinal lumen include: coccidia, helminths, mycotoxins and pathogenic bacteria. During the life of the birds both the intestinal microbiome and the bird’s immune system are developing in an interactive way. While commensal bacteria do not cause disease, fragments from their cell walls contribute to waste in the gut. The resulting PGNs form a significant challenge to the intestinal health of poultry.

Intestinal lysozyme can degrade PGNs which decreases the potential inflammatory signals caused by PGNs. The breakdown of PGNs can result in muramyl dipeptide (MDP) formation which, in turn, is sensed by intracellular receptors (such as NOD2) and has an anti-inflammatory effect. A broiler with a high feed intake and fast passage rate, however, cannot produce enough endogenous lysozyme to break down the amount of PGNs present in its gut. If an exogenous muramidase (Balancius) is added to the diet, the capacity to break down PGNs in dead bacterial cell walls is increased, supporting optimal gut functionality.

Benefits of breaking down PGNs

The effects of muramidase as a feed additive on the degradation of PGNs from the cell wall fragments of (dead) microbiota in the intestinal tract, could reduce the potential inflammatory effects induced by PGNs. A trial published in 2020 confirmed that exogenous muramidase hydrolysed PGNs to MDP, activating NOD2, which has an anti-inflammatory action and influences host response to improve intestinal health.

A recent study was designed to offer in vivo proof that an exogenous muramidase (Balancius) breaks down PGNs in the gut lumen of broilers, and to investigate how it may reduce inflammatory effects on the intestinal mucosa, thereby improving feed efficiency and gut health. To do this, a novel PGNs challenge model was designed at Wageningen Livestock Research. In order to invoke a consistent and significant challenge to the broiler gut, a known amount (2.6g/kg) of PGNs, isolated from Bacillus subtilis, was used. This is approximately double the amount of PGNs that broilers would be exposed to under standard conditions.

From 0-21 days broilers were fed 1 of 4 experimental rations based on maize and soyabean meal. PGNs were added to 2 of the treatments, one of which was also supplemented with the 35,000 LSU (F)/kg of exogenous muramidase. A further treatment had only the exogenous muramidase added to the control diet. While performance was evaluated, the set-up of the trial was not designed to demonstrate performance differences but rather to look in-depth at the effects of PGNs in the gut of broilers. To do this, blood, digesta and intestinal tissue samples were evaluated at 2 and 3 weeks of age.

The inclusion of an exogenous muramidase, with and without PGNs, significantly increased the solubility of peptidoglycans in small intestinal digesta (Figure 1). This demonstrated the in vivo activity of the exogenous muramidase that, as expected, broke down PGNs in the gut lumen.

The gut microbiota provides key protection against pathogens and is sensitive to disturbance which can lead to inflammatory responses in the gut. If this happens, gut functionality is affected; including barrier function, nutrient digestibility and absorption capacity. It has been reported that the absorption of carotenoids decreases during enteric infections.

A positive effect on the immune system

This study demonstrated that the PGNs challenge increased the influx of intraepithelial lymphocytes and represented a challenge to the local immune system (Jansman and others, unpublished). Birds receiving a diet with both PGNs and an exogenous muramidase did not show such an increase in intraepithelial lymphocytes. This suggests a positive effect on the local immune system – moderating inflammatory responses in the gut mucosa under challenge conditions. Subtle changes in genes related to small intestinal epithelial integrity and epithelial function were also observed when muramidase was included in the diet.

The risk of PGNs to intestinal health and optimum production is constant. This new study confirms the positive effects of supplementing diets for broilers with an exogenous muramidase. It also answers more questions about the negative effects of PGNs on performance. Its importance is due to the information provided on ways to maintain gut homeostasis and hence support the efficiency of poultry production.

Exogenous muramidase activity increased the solubilisation of PGNs in the digestive tract and reduced the inflammatory effects of PGNs that affect intestinal functionality. However, there is still more to learn and further studies on the mode of action of exogenous muramidase will help explain its ability to unlock hidden potential in poultry.

Understanding the processes involved can help scientists to improve animal health, welfare and performance. Doing this in a sustainable manner will also help the industry to meet the growing demand for animal products from a growing world population.