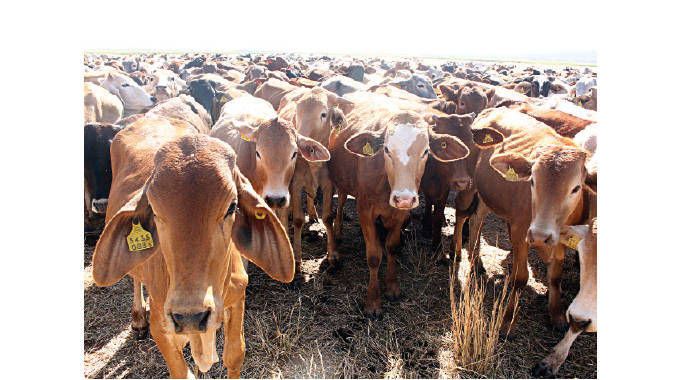 THE number of cattle that succumbed to tick-borne-related diseases such as January Disease went down to 12 503 during the 2020/2021 agricultural season compared to the previous season when the country recorded 33 514 deaths.

The latest development follows interventions by Government through the $500 million Presidential Tick Grease Blitz programme, which was launched by President Mnangagwa last November.

The grease is being distributed to farmers to curb the spread of tick-borne diseases, particularly January Disease. The disease is common between December and March and is spread through the bite of the brown ear tick.

Under the scheme, each farmer is getting 1kg of the grease and they have to produce a stock card to get the chemical.

Over one million cattle farmers across the country received free dipping chemicals, while 4 000 dip tanks countrywide were rehabilitated to curb the spread of tick-borne diseases.

In an interview yesterday, the Department of Veterinary Services (DVS) chief director, Dr Josphat Nyika attributed the decline in the tick-borne disease-related deaths to the interventions by Government through the Presidential Tick Grease Blitz.

He said the tick grease distribution and application programme under the Presidential livestock input scheme has saved tens of thousands of cattle from January disease this season.

“Following the launch of the Presidential Tick Grease Blitz programme, many cattle were protected against tick-borne diseases.

“If we are to compare with the previous rainy season 2019/2020, fewer cattle became sick and fewer cattle died from tick borne diseases following the launch and implementation of the programme in the 2020/2021 agricultural season,” he said.

“This attests to the effectiveness of regular dipping and application of tick grease in the control of tick related deaths in cattle.”

Dr Nyika said the tick grease programme is in line with the National Development Strategy 1 (NDS1), which prioritises animal health and production through strengthening farmer knowledge, skills in livestock production and health, to enhance productivity.

The Government, cognisant of the fact that the livestock sector has to be run as a business to ensure that it makes significant contribution to Zimbabwe’s socio-economic growth, crafted a number of national blueprints, namely, the NDS1, the Agriculture and Food Systems Transformation Strategy and the Livestock Growth Plan (2020-2025).

The Livestock Growth Plan, which seeks to grow the livestock sector to a US$1,9 billion economy by 2025, was approved by Cabinet in August last year.

Livestock production in Zimbabwe is an important source of income and a safety net for millions of people, particularly rural women and youth, and is a significant contributor to agricultural GDP.

“Under the Livestock Growth Plan, the Presidential Tick Grease Blitz, which was launched on 20 November 2020, entails distribution of a targeted one million one kilogramme packs tick grease for free to one million cattle-owning households.

“The programme supplemented intensive cattle dipping programme in the rainy season, when cattle are dipped once every week and tick grease being applied in-between the dipping seasons,” said Dr Nyika. He said farmers were trained on the correct application of the tick grease on cattle on the tick feeding sites on the animal such as ears, base of the horn, under the tail, and tail brush.

“Intensive dipping is when cattle are dipped three times in two weeks and tick grease will be applied in-between the dipping sessions. Farmers are advised to apply tick grease in the ears, under the tail and on the tail brush, which are feeding sites of the brown ear tick which transmits January Disease,” said Dr Nyika.