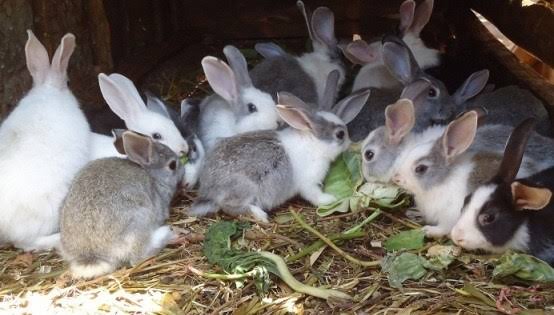 Youths in Nyahururu Sub-County have ventured into rabbit farming as a way of creating self-employment due to the scarcity of job opportunities.

The  Chairperson of a youth self-help group at Lower Cosite village in Nyahururu town, Peter Kinyua, said they joined and embarked on rabbit farming to create employment for themselves.

“It’s high time we as youths join and share ideas in order to create job opportunities. We must admit that there are no jobs in Kenya and that doesn’t mean we stay idle. That’s why we have come together to start up a project of rabbit farming to earn a living,” he added.

A member of the group, Fredrick Chege said they did not venture into rabbit farming for meat alone, but also for their urine which he said had many agricultural benefits.

“Rabbit urine is highly valued in the agricultural sector. Many counties that practice agriculture use it as a pesticide to control pests that destroy crops,” he explained.

“Rabbits have huge benefits that many people don’t know. We have done enough research before coming to a consensus to venture into this kind of farming. We have realized that rabbits not only provide white meat, which is of good health to consumers, but also produce very beneficial urine,” Chege went on.

He claimed a rabbit produces an average of 350ml of urine every day and so 10 rabbits for instance can give a farmer about three litres of urine which translates to Sh900 daily as a litre of rabbit urine goes for Sh300.

In Kenya, rabbit farming has been improving over the last decade. According to Food and Agriculture Organization Corporate Statistical (FAOSTAT) – Kenya report, rabbit population increased from 534,000 in 2010 to 961,000 in 2015.

In 2010, the government through the Ministry of Livestock Development initiated a Rabbit Production Project in 22 districts spread across the country, following the Impact Assessment Report (2006) by National Agriculture and Livestock Extension Programme (NALEP) which had identified rabbit production as a means to address food security and boost income for small scale farmers.

‘If They Die, We All Die’: Drought Kills in Kenya