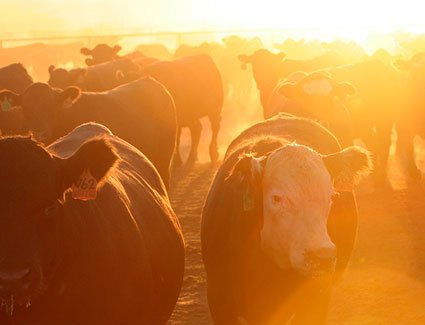 When Lacey Alexander went to college, she thought she wanted to become a veterinarian. Then she saw a job posting at one of Cargill’s protein facilities. In the end, she chose to take care of animals – although she didn’t ultimately become a vet.

Alexander is an animal welfare advisor for Cargill Protein- North America, and has played a key role in Cargill achieving a Tier 2 ranking from the Business Benchmark on Farm Animal Welfare (BBFAW), the leading global measure of company performance on farm animal handling and wellbeing.

Each year, BBFAW evaluates more than 150 companies and ranks them in six tiers, with tiers 1 and 2 made up of companies that have best incorporated animal welfare into their strategy. Only 22 organizations reached the top tiers this year—Cargill for the fourth consecutive time.

“Animals are sentient creatures,” she said. “They are making the ultimate sacrifice: giving their lives to nourish ours. It’s our responsibility to give them the best care we can.”

She says Cargill’s BBFAW ranking is a reflection of our plants and producer partners. “We’re in Tier 2 because we have the best employees and outstanding producers.”

As a leader in delivering protein to the world’s tables every day, Cargill is committed to treating animals with respect and dignity. We also know it’s important to our customers.

This is something Kristin Tupa, sustainability manager for Cargill Protein – North America, has seen firsthand. After joining Cargill as a wheat trader, she moved on to the egg business, where she helped a major quickservice restaurant chain transition to cage-free eggs, among other projects.

“Our customers want to know we’re a leader in animal welfare. BBFAW is a third-party recognition of leadership that gives us that credibility,” Tupa said.

She says BBFAW is particularly meaningful because it looks at our progress across species, providing a holistic assessment of our policies, programs and metrics—as well as areas for improvement.

During the past year, Cargill has made several investments focused on animal welfare. For instance, an AI-driven project in China is listening to chicken vocalizations to identify patterns that may signal a health or welfare problem before it’s detectable by the human eye.

In Ireland, Cargill is investing in Cainthus, a startup that uses computer vision software to monitor nutrition, health and well-being among cattle, with the potential to expand to other species.

Through our ongoing partnership with Temple Grandin’s research team at Colorado State University, we continue to work on minimizing discomfort for cattle during the harvesting process.

Like Alexander, Tupa is quick to acknowledge that our progress has been a team effort.

“We work with phenomenal producers who share our values and commitment to animal welfare,” she said. “To get to Tier 2, every part of the chain has to be strong.”