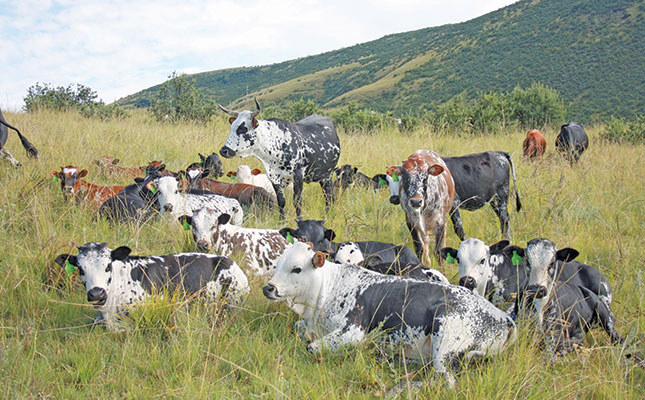 On 9 May 2020, the Biggs family, who farms in the Eastern Cape, sold a Nguni herd sire for a world-record price of R310 000. Clive Biggs spoke to Mike Burgess about the family’s well-adapted Nandi Nguni stud in the foothills of the Drakensberg near Cedarville.

“Our goal is to preserve the original Nguni traits by letting nature guide us,’’ says Clive Biggs, who, with his father, Lionel, and brother, Brian, is a member of the LBC Biggs Trust.

This approach, in a nutshell, is the main breeding objective of the family’s Nandi Nguni stud of 700 breeding female animals, one of the oldest and largest Nguni studs in South Africa.

The Nandi stud, which is run on sourveld at an altitude of between 1 600m and 2 100m, is expected to produce efficiently despite minimal inputs.

The herd’s abilities under these extensive conditions are continually fine-tuned by selection from some of the finest Nguni bloodlines to improve functional efficiency, adaptability, disease resistance, fertility, balanced milk production, mothering ability and productive longevity.

“A central factor in improving our herd has been the use of the best genetics we could find,’’ explains Clive. “There are some bloodlines that have proven to be the best, and today, we have a combination of some of the oldest.’’

The development of Nandi Ngunis
As early as 1977, Lionel and his older brother Victor began selecting Ngunis while farming in Matatiele in the Eastern Cape. The brothers’ involvement in livestock speculation enabled them to source optimal Nguni-type genetics eight years before the Nguni Cattle Breeders’ Society of South Africa was established in 1985.

By early 1979, however, the consolidation of the former Transkei and resultant expropriation of land claimed their farms in the Ongeluksnek area near Matatiele.

Victor saw the loss of his farm as an opportunity to return to the Border region of the Eastern Cape, where he had grown up with his grandfather, but Lionel opted to move to the nearby Cedarville district.

The brothers split their Nguni herd accordingly, and in 2002 Victor dispersed his then commercial herd on the farm Haddon in the Kei Road district, achieving record prices.
Clive was two when the family settled on Mooifontein in Cedarville in 1979.

He and his older brother, Brian, watched the Nandi Nguni stud (registered in 1985) develop in leaps and bounds, thanks to genetics bought from a wide variety of sources: Makhathini Flats (Zululand), the Bartlow Combine Research Station herd (Hluhluwe), the Shashweni Breeders’ Society (Zululand), the Owen Sithole Agricultural College herd (Empangeni), the University of the North herd (in today’s Limpopo), the Natal Parks Board herd, the former Ciskei government herd (at Mpekweni in the Eastern Cape) and the well-known Ngunis of Ted Riley in eSwatini (formerly Swaziland).

Although these genetics played a crucial role early on, considerably more genetics have been sourced countrywide since Brian and Clive became actively involved in the operation.

“Our father started the Nguni herd with passion and with an eye on the future,’’ says Clive. “We’re hoping to do the same, and farm for our children.”

Today, the Biggs’s operation, which is run on 4 500ha, comprises the Nguni stud, 500 commercial Nguni cows, a 400-ewe flock of Nguni goats, and a 100-ewe flock of Meatmaster sheep.

Adapted to tough conditions
The climatic, topographical and grazing challenges of the area place exceptional demands on their Ngunis, which include medium-framed cows with an average weight of 370kg.

“Our Ngunis must be able to maintain their condition through extremely harsh winters on the veld; they have to be hardy and capable of utilising all sourveld grazing in mountainous areas,” says Clive.

He adds that the last few years have seen significant changes to the regional climate, and the Nandi herd has done well to adapt to this too.

“The rainy season has shortened, and our dry periods have become longer. The Nandi Ngunis’ ability to adapt to these conditions has been amazing; the cows walk huge distances for water and still maintain themselves and raise calves.”

The Biggs’s veld management system is based on high-density rotational grazing and sparing selected camps for winter.

During the breeding season, cattle are rotated in camps every two to three days; once the bulls are removed, smaller groups of cows are amalgamated into herds of between 300 and 400 and placed in camps to graze non-selectively and crop the grass short.

With the increased hoof action and large amounts of dung and urine, the soil receives a boost of natural fertiliser to ensure good regrowth.

In February, selected camps are rested until June/July, when the cattle are reintroduced to take them through winter.

Production
The Biggs family gauges the success of beef production by how cost-effectively the maximum number of kilograms of beef can be produced from the veld. Minimising inputs is therefore of crucial importance.

They have, for example, not dipped their cattle during the past 17 years, despite the fact that redwater (both strains) and gallsickness are prevalent in the area. They also keep inoculations to a bare minimum, with five-month-old calves receiving a shot of Covexin 10 (a 10-in-1 clostridial vaccine), while heifer calves get an extra shot of Brucella abortus S19 vaccine.

All the cattle receive a phosphate P6 lick in summer and a 20% urea-based lick in winter, while the only forage crop on the properties is a 20ha block of Eragrostis.

700 stud female animals) are put to cows in multiple- and single-sire herds. The potency of Nandi bulls is best illustrated by T12 58, who in the past season was put to 80 female animals, of whom 78 were in calf after a three-month breeding season.

Cows and heifers calve from September to November (90%) and February/March (10%), and achieve a herd conception rate of 90% and an average inter-calving period of 402 days.

Stud heifers calve at 35 months and all breeding female animals receive Eragrostis bales on the veld while calving. Late in their gestation, the stud female animals are brought closer to home to calve so that the calves can be tagged and registered.

During this period, the breeding female animals receive Eragrostis hay for about six weeks before being moved back onto the veld.

Calves are weaned at about seven months, by which time they weigh about 50% of their dams’ weight; bull calves average 190kg and heifer calves 180kg.

Every season, half of the stud heifers are kept as replacements and selected bull calves are retained as future herd sires or to be marketed as breeding bulls. All weaner oxen, besides 125 that are grown out exclusively on the veld, are sent to a private feedlot.

After about four months in the feedlot, the weaner oxen achieve an average carcass weight of 210kg, while the oxen on the veld are marketed on reaching an individual weight of about 450kg at an age of three to four years.

“We produce cattle suitable for a feedlot as well as organic, grass-fed animals, raised in their natural environment and sold for quality meat,’’ says Clive.

According to Clive, demand for female Ngunis is insatiable; in 2001 they sold an in-calf heifer for R45 000, which remains their top price for a female animal. “We can’t keep up with the demand for females,’’ he says.

This year’s KZN Elite Nguni Sale took place via WhatsApp and exceeded expectations, not only due to T12 58’s world-record price, but the overall prices.

“We sold 100% of our animals. Times are uncertain, especially in lockdown, so we were very happy with the prices and the interest shown in the cattle.”

On a quest to breed ‘the perfect Brahman’