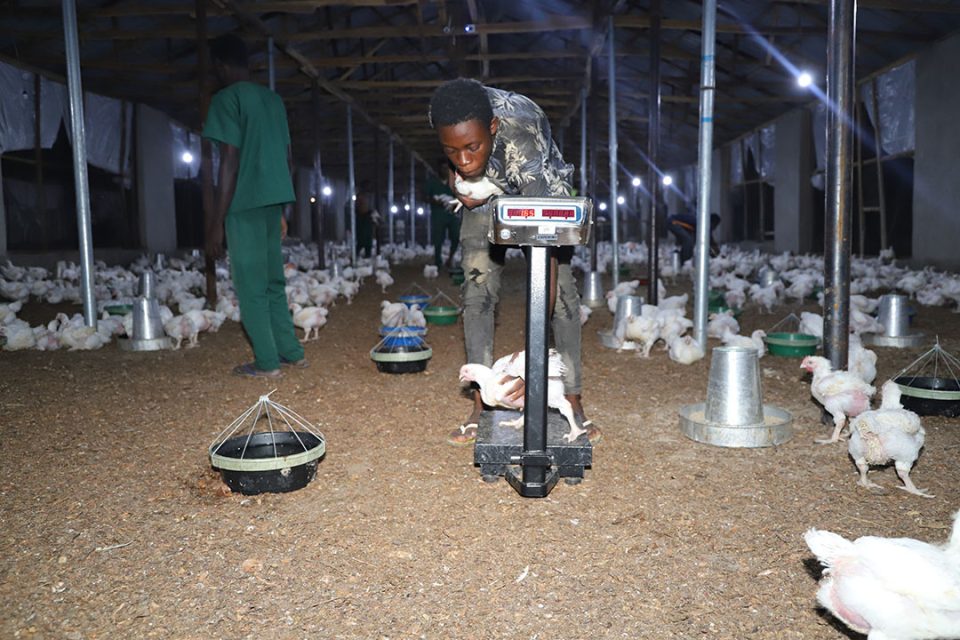 How a spice firm named Agricorp International is now making a huge investment in Nigerian chicken production – and in the country’s next generation of agricultural leaders.

As it is in other countries, chicken is very much in demand in Nigeria. However, because production doesn’t nearly meet demand and it’s been very difficult for companies to legally import chicken, it’s being smuggled into Nigeria in huge amounts.

Over a billion birds

“The chicken market is estimated to be 1.4-1.6 trillion kg (1.095 billion birds) a year right now, and our current capacity is about 11 billion birds a year,” explains Kenneth Obiajulu, CEO and co-founder of Agricorp International, a spice production company founded in 2018 which has also empowered over 5,000 smallholder farmers to increase their incomes by about 20% while providing them with better market access.

In 2019, the Central Bank of Nigeria estimated that over 1.2 million tonnes of poultry meat were smuggled into Nigeria from the Republic of Benin. Still, of all African nations, Nigeria is the largest egg producer with the second-largest chicken producer.

Agricorp International decided to do something about this shortfall and is investing over 20 billion Nigerian neira (US$ 48.2 million or € 44.6 million) in the production, processing (and eventually, export) of chicken. Obiajulu is leading the charge, leveraging his experience working for the Bill & Melinda Gates Foundation, the Rockefeller Foundation, the World Bank, Heineken and more.

“Our company is very ‘big’ on impacting lives and communities. We saw the deficit and wanted to invest,” says Obiajulu. “We see the opportunity be able to employ at least 100,000 people directly and indirectly, and so we’ve put together an investment thesis for livestock with poultry to start with.”

In September, Agricorp secured some funding to establish its poultry business and expand its spice businesses and is actively pursuing more.

This is the Agricorp International chicken strategy. It is purchasing 142 poultry operations across the states of Kwara, Kogi and Nasarawa and either expanding them or bringing these operations up to capacity. This alone will raise the country’s chicken production by at least 3 million birds yearly, but Obiajulu reports that “this is less than 10% of our 2025 goal. By the end of that year, we’re aiming to have 1,000 farms in areas that already have poultry production and new areas. This will be about 40 million birds per year.”

Obiajulu and his team are confident that processors will be able to handle this number by running additional shifts and adding processing lines. Agricorp already has contracts in place with the biggest processors in the country and also owns a processing plant that will come online in 2022. “We have several well-established hatcheries in Nigeria and we have a contract with one of them as well as a contract with a feed mill,” says Obiajulu. “Collaboration with partners is crucial. It’s a win-win situation. Their capacities will increase as our capacity increases. This will be how we will reach 100,000 jobs by 2025.”

In the hopes and plans of Agricorp International, many of those jobs will be filled by young people. Like elsewhere, most farmers in Nigeria are over the age of 65 while young farmers are the future. To engage youngsters, Agricorp International has rolled out its ‘Project Eclipse 2025’ which aims to involve young people working as entrepreneurs in chicken production and offer excellent opportunities in processing plants.

“During my first job at Heineken, they had a project with the term eclipse and I liked that, that you eclipse everything with what you are doing,” says Obiajulu. “We knew that engagement was needed but how do we engage young people? How do we ensure they are educated about how the system works, what to do and where the present and future opportunities lie? We decided to ask them. They said direct hands-on involvement and a share in the profits is what’s needed.”

Agricorp International listened. In 2020 a pilot project began to test how youth engagement would work on a farm with 50,000 broilers. “We brought in 3 experienced people, 2 farm managers and a veterinarian, and took on 17 young people with no experience,” explains Obiajulu. “They were trained using a training pen to give them an overview of how production changes from week to week. Then they got their own test pens to look after. They learned husbandry and how to keep mortality down.” Temperatures in Nigerian poultry barns can be very high, so proper use of ventilation is critical. Obiajulu explains that producers have modified pen height and use cross ventilation to get better results with less electricity.

“We’re at a tipping point in Nigerian history where everything is about to change.”

The pilot project is being expanded and, at the same time, Obiajulu and his team are identifying potential entrepreneur models. One involves having every flock managed by 2 young poultry farmer entrepreneurs. They receive a salary but also a share of the profits. They receive all the inputs on credit (chicks, feed, vaccines, other support), and depending on how many birds reach 1.6-2 kg and other parameters, they earn half the net profit. Another model involves young people writing a full business plan to build and operate a barn on their family’s land.

Poultry feed is expensive in Nigeria and in mid-December the Poultry Association of Nigeria called for the government to ban the export of maize so that it can remain available for poultry feed mills. The call was made at the recent 2021 Nigeria Poultry Show, themed De-Risking the Nigerian Poultry Industry: Stabilising Critical Inputs and Market Prices for Sustainability. Obiajulu recognises that there are challenges such as feed cost and more, but overall, he sees a bright future for large-scale chicken production in Nigeria.

“We have everything in Nigerian agriculture,” he says. “Every state has arable land and 45% of Nigeria is arable but has not yet been cultivated with maize, casava and more. There is more than enough water, land and workforce. Our biggest challenge as a company is to secure financing to support up-scaling. That’s basically my full-time job. I’ve met with potential investors from Nigeria, Dubai and the UK, and I will be approaching investors too in North America and elsewhere. The market opportunity is there and we need to increase chicken production capacity as soon as possible. There is lots of room for investment and we’ll have a range of investors.”

The most exciting thing for Obiajulu is being there on the cusp of a major change. “I have a quote on my office wall from Shakespeare’s Julius Caesar where Brutus speaks to Casius about a tipping point in the political arena of the time,” he says. “We’re at a tipping point in Nigerian history where everything is about to change. We are moving from zero forward and igniting passion in young people. Already, people are telling us that we are doing amazing things, so we are already having a direct impact to inspire our country.”

EggsCargoSystem® the safest and most sustainable logistics solution for eggs

Stop Being Wishy-Washy About Your Workouts To Improve Your Life

Chickens lay US$ for Moyo brothers