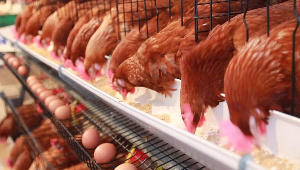 The Ghana Poultry Project (GPP) in collaboration with the United States Department of Agricultural (USDA) has inaugurated Community Animal Health Workers (CAHW) in six communities in the Kpone-Katamanso Municipality in the Greater Accra Region.

Introducing the personnel to the various communities, Mr. Joseph Kofi Abuh, Deputy Director Greater Accra Regional Veterinary in charge of Regulatory and Food Safety Unit, called on the workers to exhibit some level of decency and commitment in line of duty.

He explained that the job when executed effectively, would reduce the dangers farmers encounter and residents who engaged in domestic or local poultry farming would benefit immensely from the expert advice from personnel deployed into the various communities.

Mr. Christian Koduah, GPP Coordinator, stated that about 50 CAHWs have been trained across some eight selected districts, which included; Ga East, Ga West, Shai-Osudoku, Ningo-Prampram, Kpone-Katamanso amongst other districts all within the Greater Accra Region.

He said the personnel would need the assistance of the opinion leaders within the various communities to be able to perform their duties successfully.

Mr. Koduah said the project would also unravel the entrepreneurial prospects in the personnel as they worked to pay back their supplied products which would, in turn, keep them in business and in close contact with their clients.

The personnel were given bicycles, two bags of poultry feed, new castle vaccines, a weighing scale, uniforms, and vaccine carriers as start-up tools.

Immunomodulation is Key to Poultry Welfare and Performance