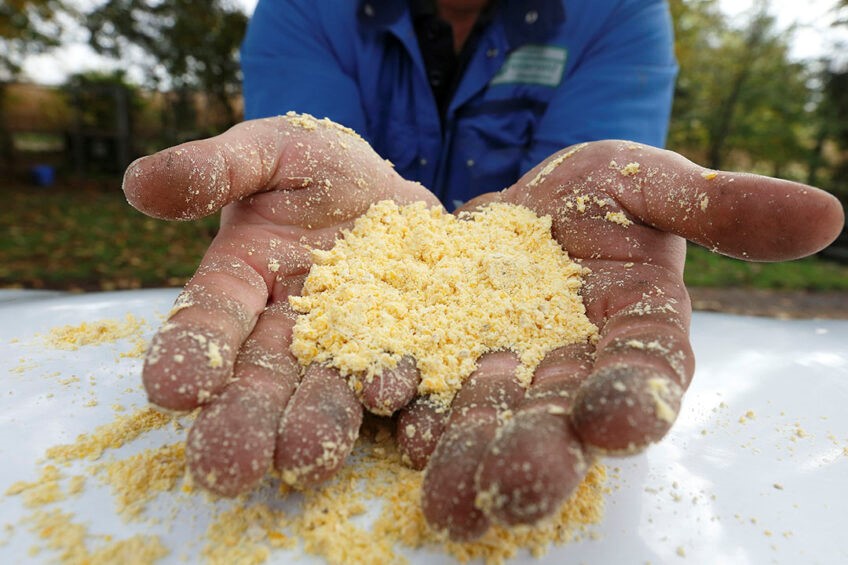 The reduction of dietary protein in broiler feeds has the potential to reduce feed costs and environmental impact, while improving bird welfare. Low-protein diets are usually formulated by reducing soybean meal inclusions and increasing the supplementation of amino acids. A recent study looked at the impact of readily digested maize starch in broiler feeds.

Dietary protein levels are reduced by increasing feed grain inclusions which in turn increases dietary starch and consequently impacts the starch-protein digestive dynamics in broilers. It has been proposed that rapidly digestible starch would increase glucose availability in the anterior small intestine which could lead to competition with amino acids’ absorption via their respective sodium-dependent transport systems.

In this context, an alternative approach was adopted in a study conducted at the University of Sydney, Australia, where dietary protein levels were reduced by the partial replacement of maize grain with maize starch as shown in Table 1.

The low-protein diet contained relatively high dietary starch levels and was supplemented with amino acids. The idea behind this approach was to evaluate the impact of readily digested maize starch on the digestive dynamics of supplemental and protein-bound amino acids.

The reduction of dietary protein while substituting maize grain with maize starch modified the dietary composition considerably. Maize inclusions decreased from 465 to 98 g/kg whereas maize starch increased from 0 to 483 g/kg in the transition from a high to a low protein diet. Additional supplemental lysine, methionine and threonine were included in the low protein diet, to which isoleucine, valine and arginine were also added. This meant an increase in the inclusion of non-bound amino acids from 3.54 to 14.23 g/kg.

As a consequence, the high protein diet contained 219 g/kg protein and 269 g/kg starch while the low protein diet contained 190 g/kg protein and 439 g/kg starch. Both dietary treatments were offered to 8 replicate cages (6 birds per cage) of male Ross 308 chicks raised from 7 to 28 days during which growth performance was monitored. At 25 days, total excreta was collected over a 48-hour period to determine apparent metabolizable energy (AME) and nitrogen retention. At 28 days birds were euthanized to take digesta from the distal ileum to determine the digestibility coefficients of starch, protein and amino acids. Gizzard pH and relative pancreas weights were determined, and blood samples taken from the anterior mesenteric vein to determine concentrations of free essential amino acids in the portal circulation.

Dietary treatment effects on growth performance, nutrient utilisation, ileal digestibility coefficients of starch, protein, essential amino acids and their concentrations in plasma from the portal circulation are shown in Table 2. The low–protein diet significantly increased feed intakes by 8.0%, enhanced AME by 0.63 MJ/kg DM, and nitrogen retention by 6.4%. The elevated gizzard pH (2.57 vs. 3.92) may indicate that the reduced dietary protein level demanded lower secretions of pepsin and HCl in the proventriculus. Gizzard functionality may have been depressed as there would have been less fibre in the reduced CP diet. Ileal starch digestibility significantly increased by 10.8% (0.967 vs 0.873) but decreased protein digestibility by 6.1% (0.723 vs 0.770).

The transition to the low-protein diet significantly compromised the digestibility of all 9 amino acids but significantly increased free concentrations of lysine by 94% (76.8 vs 39.5 mg/mL), methionine by 69% (21.6 vs 12.8 mg/mL), threonine by 61% (82.0 vs 51.0 mg/mL), and valine by 37% (41.8 vs 30.6 mg/mL) in the portal circulation. The significant increase in plasma concentrations of lysine, methionine, threonine and valine taken from the anterior mesenteric vein indicates the possibility that supplemental amino acids are more likely to enter the portal circulation than their protein-bound counterparts.

Intestinal uptake of nutrients is probably a critical limiting factor on broiler performance and thus understanding the digestive dynamics of starch and amino acids becomes relevant in poultry nutrition. The outcome of the present study indicates that the transfer of amino acids into the portal circulation can be influenced by dietary manipulations and supplemental amino acids appear in the portal circulation more rapidly than protein-bound amino acids. This could also be an indication that supplemental amino acids may be less prone to ­catabolism in the gut mucosa.

What it takes to run a good poultry hatchery