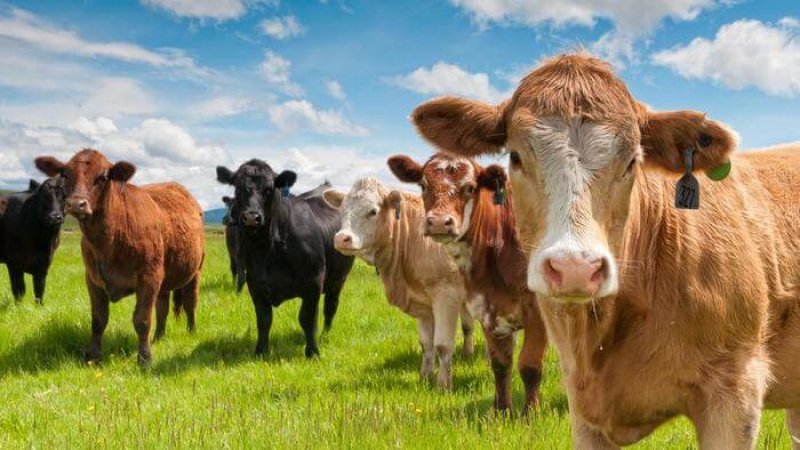 When Dr. Baker Bakashaba graduated from Uganda’s Makerere University Medical School in 2014, a close family friend gave him the gift of a cow.

The generous gift rekindled Bakashaba’s desire to engage in livestock farming at his rural home in Western Uganda. Motivated by the kind gesture and his family’s farming background, he founded Novine Farm. Six years later, he is one of East Africa’s most successful small-scale livestock breeders.

Animal resources are key assets that support the livelihoods of many rural and pastoral communities in Africa, but their full potential is yet to be realized across the continent, according to the African Union Inter-African Bureau for Animal Resources (AU-IBAR). Many traditional herders in Africa grapple with livestock production challenges and numerous veterinary diseases, as well as limited access to information and extension services.

Now the AU-IBAR is seeking to address that situation. It’s helping traditional herders and aspiring breeders like Bakashaba to transform Africa’s animal sector by prioritizing animal health — including new information about genetics — production, trade and marketing. The agency’s five-year strategic plan consolidates achievements in livestock and fisheries to strengthen work on apiculture, wildlife, natural resources management and climate change with an aim to build rural incomes and reduce the continent’s dependence on imported animal products.

When Bakashaba, a 35-year-old father of two, started Novine Farm, his goal was to add at least one cow every month to his stock, buying local breeds and fattening them for three months before selling them to buy improved breeds.

Today he has over 150 cows, including Friesian and dairy crosses and a few indigenous (Ankore) longhorn cattle that he breeds for their beauty and cultural  reasons, as well as goats and sheep.

“A few of my livestock are for sentimental value,” he says. “I don’t even milk them. Their milk production is low, but of high quality, fat content and nutritional value. They are also resistant to diseases and easy to keep.”

Bakashaba also grows bananas on five of the 200 acres that his family farms.

“I grew up on the farm and gained experience from my parents, fellow farmers and information from digital platforms on best farming methods and how to control livestock diseases to improve my livestock breeds,” says Bakashaba, who still practices medicine and is the project manager of the Comprehensive HIV/AIDS Control Project in North Eastern Uganda. He regularly spends time supervising activities on his farm and has good workers who monitor and feed his livestock.

The biggest challenge that livestock herders often face is the poor quality of veterinary medicines used to treat animal diseases. East Coast Fever (ECF) and anaplasmosis diseases pose a threat to livestock production, as do ticks that are resistant to drugs despite constant spraying, Bakashaba notes.

The high cost of treatment erodes the quest to create wealth through livestock breeding. Unpredictable weather patterns and climate change resulting in extreme droughts also take a toll on livestock, says Bakashaba, who can recall 2016-2017 as dry years when he saw milk and beef production drop significantly.

Occasional market closures due to outbreaks of foot and mouth disease limit access to buyers. Animal interactions spread the disease in local markets, yet breeders need to freely trade, he says.

“We have lived with these livestock diseases for far too long,” Bakashaba says. “We vaccinate livestock in Uganda, however, across the border there is not much emphasis on vaccination, hence it is difficult to control diseases in cross-border livestock trade and search for pasture. We need sustainable interventions to stop the spread of disease through innovative technologies developed by scientists to increase wealth for small-scale breeders.”

The challenges that Bakashaba faces are common problems in Africa. A study, “Perceptions and practices among Zambian sheep and goat traders concerning small ruminant health diseases,” published in June by the Plos One journal, finds that trade in animals and animal production is a key factor in the transmission of infectious diseases in Zambia.

On the positive side, there is a growing livestock market in Uganda and East Africa and Bakashaba gets orders from across the border. In addition to fresh milk production and hides, opportunity lies in value added products, including pasteurized milk and cheese, which has a long shelf life.

Bakashaba is urging scientists to step in to help with the eradication of diseases, including region-specific solutions, as well as ensuring greater access to laboratories that process veterinary tests.

“As a medical doctor, I recommend laboratory testing for diseases before diagnosis. However, in the livestock sector, we have had a lot of treatments without proper diagnosis, leading to issues such as misuse of antibiotics,” he explains.

Meanwhile, scientists have released a new study that deployed advanced tools to retrace 1,000 years of African pastoralist cattle breeding. They announced the discovery of a new set of detailed genetic markers and information about African cattle associated with valuable traits, such as the ability to survive blistering heat, drought tolerance, the capacity to control inflammation and tick infestations, and inherent resistance to devastating livestock diseases, including trypanosomiasis.

The study complement’s AU-IBAR’s strategy to promote coherent policies for the development of animal resources in Africa.

The findings, published in the October issue of Nature Genetics, emerged from a collaborative effort by scientists at the Addis Ababa- and Nairobi-based International Livestock Research Institute (ILRI), among other partners, to sequence the genomes of 172 indigenous cattle

The study sought to learn how — after spending thousands of years confined to a shifting patchwork of sub-regions in Africa — cattle rapidly evolved during the last millennia with traits that allowed them to thrive across the continent.

The genome sequencing work yielded evidence that indigenous pastoralist herders began breeding the Asian cattle, known as Zebu, with local breeds of cattle known as Taurine. In particular, the Zebu offered traits that would allow cattle to survive in hot, dry climates typical in the Horn of Africa.

But by crossing the two, the new animals that emerged also retained the capacity of the Taurines to endure humid climates where vector-borne diseases such as trypanosomiasis are common.Follow the latest news and policy debates on agricultural biotech and biomedicine?

“We believe these insights can be used to breed a new generation of African cattle that have some of the qualities of European and American livestock, which produce more milk and meat per animal, but with the rich mosaic of traits that make African cattle more resilient and sustainable,” says Olivier Hanotte, principal scientist at ILRI.

Bakashaba hails this research, noting it would be much cheaper to treat animals if government and the private sector collaborated with scientists to help speed up an understanding of livestock production.

Although most African livestock breeders kept herds as a cultural tradition, farmers are now transitioning to hybrid breeds, encouraged by better technologies, education and evidence-based interventions.

Research focusing on both exotic breeds and hybrids is helpful for smallholder farmers to ensure that no one is left behind, Bakashaba notes.

Genetic traits of indigenous African cattle must be respected – scientist