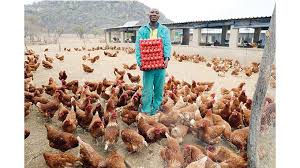 WHAT started as an experimental enterprise for two brothers from a village outside Esigodini in Umzingwane District, Matabeleland South, has turned into a massive layer poultry farming project producing nearly 50 000 eggs per month.

The two Moyo brothers, Guideous and Mduduzi, who is currently based in South Africa, are involved in layer poultry farming. Their long-term plan is to transform their business into an integrated agricultural enterprise aimed at achieving food self-sufficiency in the country.

They have also set their eyes on introducing Macadamia nuts tree plantation at their sprawling homestead at Matolokisi village as part of diversification and efforts to court potential investors to grow their business under the banner – Mpilo Royal Farming.

The Macadamia nuts plantation trial is set to be completed in 2021.

Currently, Mpilo Royal Farming is primarily focusing on layer poultry farming and they have 1 500 layers with a batch of 2 500 more day old chicks having been procured on Thursday to boost egg production. The birds usually start to lay at around 20-21 weeks of age and continue to lay for 52 weeks on average, laying fewer eggs as they near the moulting (shedding old feathers to make way for a new growth) period. The chickens are kept in five big fowl runs.

With the current layer chickens they have, they are producing 1 440 eggs daily which translates to a total of 44 640 eggs every month. A crate of eggs costs US$2,50 and demand is quite high. They also supply day-old chicks for US$1 each.

Guideous, who is the operations manager, said when they established their project, the aim was to participate in increasing the country’s Gross Domestic Product (GDP) growth, boosting food security and creating jobs.

He said in line with their vision of playing a significant role in the country’s economic growth, they intend to provide workplace experiential learning for agricultural learners.

“We also want to create a platform for development of new agricultural technology and new methods of farming, research in farming as well as providing networking platform for farmers. When we started this project in 2017, we were inspired by the desire to make a meaningful contribution to our community and the country at large,” said Guideous.

“We were also driven by the desire to empower our community through creating employment opportunities for them.”

Guideous said initially, they intended to embark on a horticulture project, but however, due to an acute water shortage in the area, they resorted to poultry albeit as an experiment.

“We realised that in this part of country, we have low rainfall resulting poor yields. Our water tables are also dry hence we then decided to come up with this idea of trying our hands in poultry and it was actually an experiment. At first, we were skeptical largely because we didn’t have any knowledge in that field,” said Guideous.

“We built our first fowl run for this poultry project in 2017 and bought 100 road runners and when they started laying eggs, we bought an incubator with a capacity to handle 360. We discovered it was a viable project and that is when we decided to go commercial.”

“We had more than 2 000 layers before the lockdown and business was doing quite well and we could realise as much as R20 000 profit.

“However, when the lockdown took effect, just like any other business we were also affected such that we ended up struggling to feed our layers and ended up selling some of the layers to recover costs,” said Guideous.

Some of the challenges they faced included sourcing vaccines during the lockdown, which resulted in 1 500 seven-week old chickens dying following an outbreak of infectious bursal disease (IBD).

Guideous said they have drilled boreholes from which they pump water using a solar powered pumping system.

Mpilo Royal Farming uses various social media platforms such as Twitter and Facebook to market their products. Most of their clients are individuals and companies in Bulawayo and Gwanda.

“We have an overwhelming number of customers such that we are struggling to meet the demand.

“We are hopeful that as we continue to expand, we will be able to satisfy the market and possibly supply the entire country with eggs,” said Guideous.

He said they were now working on courting a partner for their Macadamia nuts tree plantation, a project that is set to generate foreign currency.

Macadamia is a genus of four species of trees indigenous to Australia, and constituting part of the plant family Proteaceae. They are native to north eastern New South Wales and central and south eastern Queensland.

Three species of the genus are commercially important for their fruit, the macadamia nut, which is popularly known in manufacturing chocolates.

“Macadamia nut is a highly profitable tree that takes between four and six years to bear its first fruit and we will be completing our trial next year.

“The next step will be to do a pilot project for two hectares after which we start looking for investors to invest in macadamia plantations,” said Guideous.

“Macadamia plantations will be established at Umzingwane district to bring a lot of foreign currency that will fast track the development within the district.

“More research is also required in terms of creating micro climate for Macadamia nuts at Umzingwane District. It is not what Zimbabwe can do for me, but what I can do for Zimbabwe.”