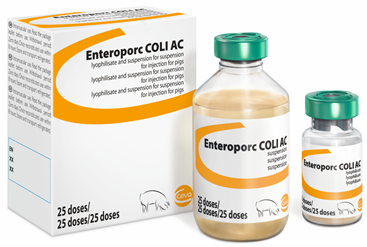 Neonatal diarrhoea (ND) is one of the most common diseases on a pig farm today. In recent years, pig production has intensified, leading to an increase in the number of gilts and sows on farms, very often of hyperprolific breeds. This has contributed to an increase in prevalence of neonatal diarrhoea, resulting in significant economic losses and increased use of antimicrobials in the farrowing house. Estimated costs for herds affected by neonatal diarrhoea with mortality of 10 % caused by disease can be as high as 134 Euro per sow per year.

These threats prompted Ceva to develop a unique vaccine containing 7 antigens against the major pathogens involved in three infectious diseases, including Clostridium perfringens Type A (CPA) with alpha and beta 2 toxin. CPA has a special significance as it is now the most frequently detected pathogen in ND after E. coli.

However, the cause of ND is multifactorial, as a variety of pathogens are involved. Therefore, broad coverage by a vaccine is important for pig producers to save time and effort and contribute to animal welfare.

Ceva actively supports the detection of pathogens with diagnostic kits directly in the herd as well as with more in-depth analysis in the laboratory.

Ceva’s support also includes recommendations for management measures that ensure the essential intake of colostrum in the first 24 hours after birth, as well as other interventions that secure an optimal suckling period.