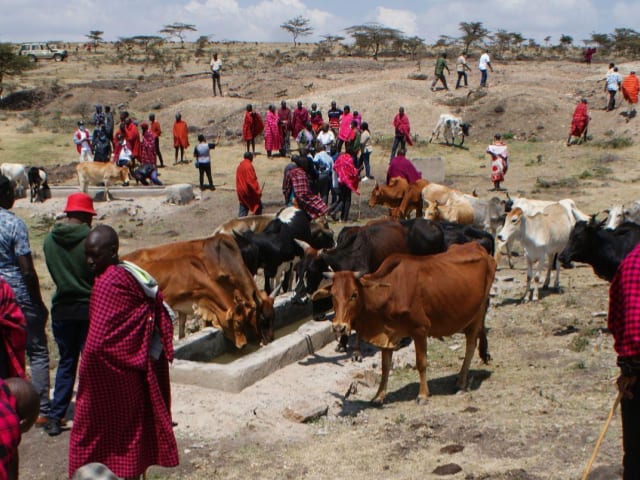 A “super cow” that can withstand high temperatures as global warming worsens could soon be grazing in climate-vulnerable countries. Scientists are using new technology to pick out genes that enable European cows to endure heat, aiming to transfer them into cows in tropical nations.

The result would be an improved breed that can handle the effects of climate change, according to Simon Lillico, a scientist who led research carried out by the Centre for Tropical Livestock Genetics and Health and the Roslin Institute.

The gene-edited cows are being developed in Edinburgh, Scotland, and researchers said they have developed protocols that could enable an easy transfer of the technology to other regions.

According to scientists conducting the three-year research, studies have shown that cows living in environments with temperatures above 25 degrees Celsius (77 degrees Fahrenheit) can suffer from heat stress, causing them to eat and reproduce less.

“Gene editing … can do a lot today in terms of tackling the problems that smallholder farmers face. It is not the solution, but it has potential.”

Heat stress is a condition that arises when an animal’s body temperature is too high. Naturally, warmblooded animals are wired to regulate and maintain a consistent body temperature during their lifetimes. Productive cattle eat grass, digest it, and produce milk, flesh that can be eaten as meat, or both, generating heat in the process. The result of heat stress in cattle is a dramatic reduction in productivity, fertility, and immunity, which has negative consequences for the animal and for farmers.

“Cows, as [with] most animals, have an optimum temperature range in which they function well. If you make them too hot, they start to suffer from heat stress,” Lillico said in an interview. “They do not eat well, they will try and drink more, and their immunity and productivity will go down.”

In temperate regions such as Europe, cows are able to lose excess heat to the environment, as certain cattle breeds there have less hair than those in tropical regions. If this trait is engineered into African cows, the resulting breed could withstand heat extremes and naturally pass on the trait to offspring, according to a CTLGH report and related studies.

“This technology cannot resolve all the challenges that smallholder farmers face. But it can help them protect their livestock from diseases, rising heat, nutrition [issues], as well as temperature and humidity variations,” said Appolinaire Djikeng, director at CTLGH.

Farmers would access this technology as germplasm — live genetic material preserved for breeding — or embedded in a heifer, according to Djikeng, saying CTLGH is working with scientists in Africa to see how the tech can help farmers breed animals with resilience to regional climate conditions.

“Policymakers, local universities, and research institutions need this knowledge so that they can use it in their laboratories to address scientific challenges that they could be facing,” Djikeng said.

Global temperatures, extreme rainfall, severe flooding, and droughts have worsened due to climate change, according to a policy brief by the African Institute for Development Policy. These have increased the risk of heat stress; affected the spread of disease via food, water, and animals; and negatively impacted food production in African countries.

The damage and impacts of climate change should be managed with sustainable action, said William Ogara, a researcher at the University of Nairobi’s department of public health, pharmacology, and toxicology.

World Wide Fund for Nature’s Alice Ruhweza and Jeff Worden weigh in on how to reset the African agricultural sector’s relationship with nature.

Ogara said gene editing is one way of doing this, as its application in other regions has resulted in animal breeds and plant varieties that are resistant to climate change pressures such as heat and drought.

“Gene editing is not new and can do a lot today in terms of tackling the problems that smallholder farmers face. It is not the solution, but it has potential,” Ogara said.

Mohamed Abduba, a herder from northeastern Kenya, said a gene-edited cow could be an option for pastoralists battling worsening drought. However, the basic needs of farmers need to be addressed before introducing this technology, he said.

“What farmers like us need is pasture, water, and money in our pockets,” Abduba said. “Other comforts will fall in place later.”