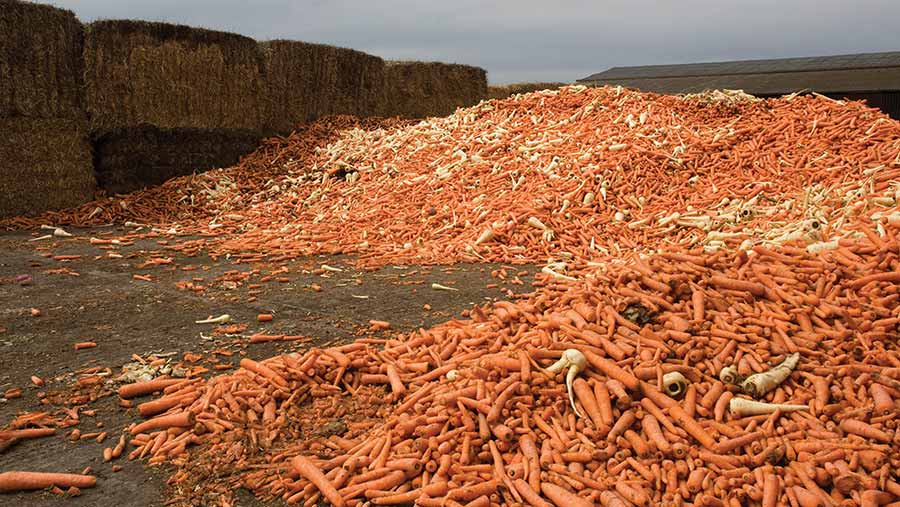 When traditional feeds are in short supply or expensive, non-traditional crops and feeds can be used.  Options vary depending on where you live and what’s available.  Jay Davison, Extension Crop Specialist (University of Nevada, Reno) is now retired, but still doing consulting, and says ruminants can eat just about anything.

“Ranchers must understand, however, that cattle are neophobic which means they are afraid of new foods,” he said.  They often avoid anything they didn’t grow up eating.

“Feed preference is learned behavior.  If cattle will try something and actually eat it and it doesn’t make them sick, they will eat a little more.”  The main thing is to get cattle to try a new feed.

“Producers in Nevada and the Northwest have been growing teff (a high-quality annual grass somewhat similar to coastal bermudagrass) for a long time.  When first introduced, many animals were reluctant to eat it.  You need to start with just a little, then more, and over time cattle will eat it readily,” said Davison.

“This year in our region we have less than normal amount of irrigation water and it will be cut off early.  Because it’s getting so late in the year, planting cool-season crops won’t be an option but people might put in a summer annual like teff, millet, or sudangrass.  Sorghum sudan might have enough water to get started, but in drought conditions there may be buildup of prussic acid.  Some of the newer varieties have less chance for that,” he said.

Teff is a good option because it grows fast.  “Within three days of planting, if it has a little water, it comes up.  Seed is cheap, and with coated seed you may only need 7 or 8 pounds per acre,” Davison said.

Some people are looking at things they haven’t used for a long time, like kochia.  “In most areas, this annual is considered a weed.  During the Depression, people in the Midwest grew kochia.  If grazed or harvested early, it’s fairly good feed.  Forage kochia is a perennial, typically planted in the fall.  It’s good feed if you already have it planted.”

It’s too late to do that this year.  “Since it’s a perennial it must become established before you graze it.  It should be part of a long-term plan rather than an emergency feed.  Forage kochia is one of the most drought-tolerant and grazing-resistant plants that we can actually buy seed for, so it can be an excellent choice for future,” said Davison.

On a short-water year, it pays to choose a crop that doesn’t take much water, like summer annuals, and choose one that has a short growing season.  “Pounds of material produced per inch of water applied are higher in warm season annuals like pearl millet and sudan.  But you still need a minimum of 50 days before you can graze.  Many people here are growing teff.  With 2 cuttings you can get about 5 tons per acre under normal irrigation and 2 tons with the water we’ll have this year,” he said.

“With sudan and sorghum sudan you have to consider prussic acid when these plants are stressed, and in a drought they will be stressed.   By contrast, teff and millets don’t have those problems.  You also must be careful about nitrate accumulation, and should test the forage,” Davison says. For some producers, the only option will be to purchase feed, and/or get the cows to eat something they normally won’t eat.

David Bohnert, Beef Extension Specialist and Ruminant Nutritionist, Oregon State University (Eastern Oregon Agricultural Research Center, at Burns, Oregon) says many beef producers are looking at alternatives, since in some places alfalfa is already $400 per ton.  “In the Northwest some of the non-traditional forages coming into more common use include teff, triticale, grass-seed straw, distillers’ grains, and cornstalks, depending on where you live. Cornstalks can be grazed, and some people bale them for transport—but there’s a lot of waste with baled cornstalks.  Cull onions, turnips, potatoes, carrots, dry beans and other vegetables are available in some areas.  Vegetable waste from food processing can be useful, depending on where you are,” Bohnert said.

Bakery waste and other wasted food is sometimes added to cattle rations.  “Food companies must occasionally dispose of cull products.  Be careful how much you feed, and balance the diet appropriately.  A nutritionist in Oregon once created a ration using cherry pies, candy bars, and corn flakes as part of the energy base,” said Bohnert.

As long as there are no toxins in the feed, rumen microbes can ferment and use nearly anything as a source of energy or protein.  If fed in appropriate amounts—not so much that it might cause digestive distress—many things can work.  Cattle can also harvest low-quality forages but these must be supplemented with protein and/or energy.

“Some of the liquid from distillers’ grains, or from making alcohol, can be used if you have a way to feed it.  One producer used old bathtubs.  The main thing that limits use of alternative feeds is location; unless you are close to where they are produced it costs too much for transport, especially those with high moisture content like cull potatoes or onions, because you are paying a lot for hauling water,” he said.

Moisture content is also a concern when feeding in cold weather.  “Wet vegetable waste may be too frozen to transport or feed.  But if you can get it delivered all at once and into a silo, it could make good silage.  Then you can mix it with low-quality grass hay or straw.  Once it’s fermented it can be fed year round, even in cold weather.”

When using alternative feeds, consider potential contaminants or toxins.  Turnips or camelina meal (a byproduct of processing camelina seeds for oil extraction in biodiesel production) can affect thyroid function.  This oil meal may contain up to 20% fat, and about 35% crude protein.

“Grass-seed straw (aftermath from growing grass seed) may contain endophyte fungi (which produce toxins) if it’s fescue or perennial ryegrass.  Pastures or hay containing these forages may have the same problem.”  These toxins cause potential problems with reproduction or interfere with blood circulation to the extremities.  In winter this may result in frozen ears, tails, or even feet.

Producers considering a feed source they’re unfamiliar with should get it tested.  Distillers grains are a good source of energy and protein but can have high sulfur levels, which can cause “polio” in cattle.

“Distillers grain is best fed in troughs.  You lose too much if it’s fed on the ground. One producer used old belting to feed on.  You could put this along a fence so cattle only have access to one side,” Bohnert said.

Feed bunks can be inexpensively created, using whatever is available.  When a study on distillers grains was conducted some years back at Oregon State University, they used old torpedo tubes the government was getting rid of.  “These were aluminum, lightweight, and made great feed bunks,” he said.