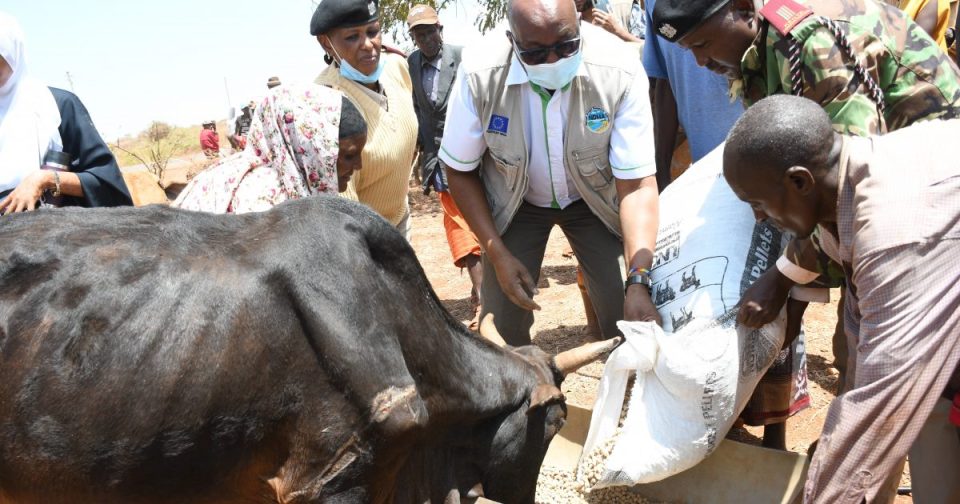 The National Government has intensified efforts to cushion livelihoods of vulnerable communities currently reeling under severe drought by enlisting the support of the Kenya Defence Forces (KDF) in the distribution of livestock food supplements.

National Drought Management Authority (NDMA) with the help of KDF distributed 135 tons of drought pellets in Saku and Moyale constituencies of Marsabit County as a way of enhancing initiatives to stop livestock deaths.

The NDMA County Drought Coordinator Porkuwa Mustafa said during the distribution exercise the face of the on-going drought necessitated the leveraging of the KDF logistical strength to hasten the transportation and distribution of the sought livestock feeds.

Mustafa who was accompanied by Marsabit Central Deputy County Commissioner David Saruni and Marsabit County Secretary Ibrahim Sora thanked the military for the support which he noted has helped in reducing logistical challenges in remote parts of the drought ravaged region.

“The collaboration with KDF is part of the government strategy to enhance synergy among its departments and agencies in the ongoing drought mitigation interventions,” he said.

The coordinator disclosed that NDMA Chief Executive Officer Lt. Col. (Rtd) Hared Adan had conveyed information that another 178.75 tons of livestock feed supplements from the Food and Agriculture Organisation (FAO) of the United Nations will be distributed in Laisamis and North Horr constituencies.

The supply of feeds, enriched with proteins and vitamins is aimed at averting livestock deaths in areas where pasture has completely been depleted.

The targeted animals are those left behind as the larger herds migrate in search of water and pasture with a 50-kilogram bag of the highly nutritious supplements set to feed a cow for 25 days and a sheep or goat for 100 days.

“The herds left at manyattas provide milk for the family members who remain at home particularly children, women and the elderly,” said Mustafa.

NDMA has also made interventions aimed at building long term resilience such as the safety net cash transfers where 20,453 households have been enlisted into the programme with the government releasing Sh 110,440,508 every two months to the beneficiaries.

According to the CEO, the current drought was a result of failed rains since 2020 which has eventually rendered 3.1 million people food insecure in 23 ASAL counties.

Adan said the figure of people in dire need of relief food in the affected regions is projected to rise to 3.5 million by June this year and appealed to more stakeholders to emulate KDF and support the ongoing drought response efforts.

On his part, Saruni said that the deteriorating environmental conditions were impacting negatively on the livestock body condition resulting in low milk production and market prices.

The Deputy county commissioner however said the government had put in place drought mitigation measures including relief food assistance, cash transfers and integrated medical outreach services among others to cushion pastoralist communities against the drought.

In addition to other drought response actions, NDMA has distributed 101,200 bags (each 50kg) of livestock feed supplements to 17 arid and semi- arid lands counties with the support from the European Union at a cost of sh405 million in the last six months.

In Karare ward, residents thanked NDMA for the assistance, but singled out the cash transfers as the best intervention the government ever made to the vulnerable.

Ms Antonella Sererit, a mother of eight, said apart from guarding them against hunger, the money had enabled them to regain their dignity from the hitherto beggar tag labeled against them.

The residents said many lives could have been lost due to famine were it not for the decision of the government to enroll them into the cash transfer programmes.