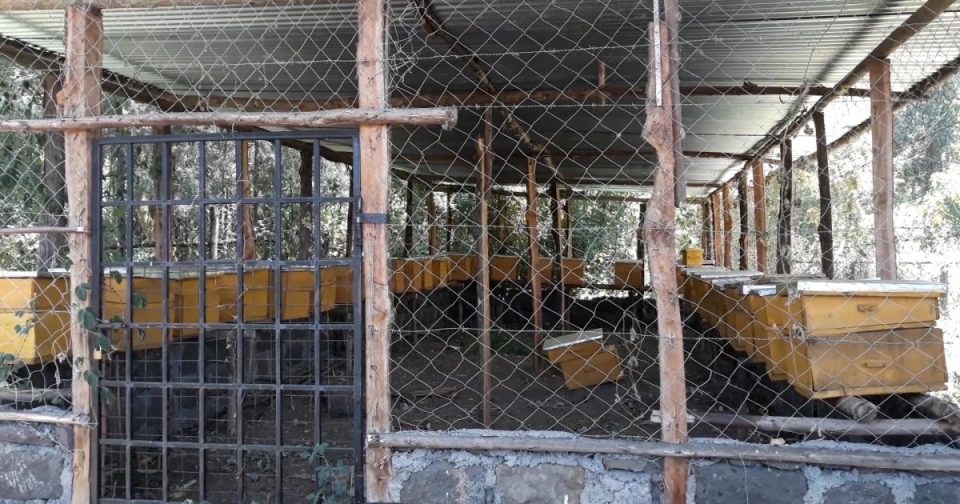 Battered by erratic weather patterns coupled with decreasing and delayed rainfall, hundreds of farmers in Mwithiga Village in Lare Ward Njoro Sub-County are switching to beekeeping as an alternative source of livelihood that is less vulnerable to climate change.

According to Robert Gacheche, Chairman to Lare Beekeepers Association, an umbrella body that brings together 38 Farmer Interest Groups, many of the arid and semi-arid parts of the Sub- County have huge potential for the production of hive products.

However existing beekeeping technologies are not suitable in a changing climate of increased temperatures and low moisture situations.

He says household incomes in Lare Ward were increasing following a joint venture between the National Agricultural and Rural Inclusive Growth Project (NARIGP) and County Government of Nakuru to train beekeepers in the region on modern honey production methods, value addition and proper agronomical practices that are enabling farmers to yield honey products that comply with the accepted chemical residue level limits.

“After the short term training the volunteer extension officers are deployed to their communities to conduct a range of community capacity building and enhancement activities such as training on beekeeping technologies, provision of extension services including on-site training, monitoring, inspection, harvesting, mentoring, quality control, marketing and record keeping,” states Gacheche.

He adds, “We have also learnt that in addition to producing honey, bees play an important role as pollinators of crops, pastures and trees, thus contributing to food security, environmental conservation and availability of carbon sink contributing to climate change adaptation.”

The joint deal has also facilitated the smallholder bee farmers within the devolved unit to get access to affordable agricultural inputs, improved high yielding and disease tolerant bee breeds and market linkages.

In the partnership, NARIGP and the County Government of Nakuru have inked deals with various financial institutions and cooperative societies aimed at offering training and affordable financing to beekeepers within Njoro Sub-County.

She explains that beekeepers in the sub-county have been equipped with skills on online marketing opportunities, record keeping, productivity and quality management, business registration and legal issues among others. The bee farmers are also being trained on maintaining books of account and making tax returns.

The program also has an agribusiness component mainly targeting women and youth encouraging them to take up a leading role in co-operative management and also embrace agriculture as a way of employment.

“Most small scale beekeepers incorporated into the initiative have been adversely affected by Covid-19 economic aftershocks yet affordable financing remains a challenge due to high interests offered. NARIGP and the County Government have been engaging financial institutions to realign their programs to enable our farmers adapt to the new reality caused by Covid-19 pandemic,” adds Bett.

She says that lack of sufficient collateral, high cost of credit, and informal business structure had rendered most small-scale poultry farmers ineligible for financing, a situation Bett points out had been worsened by the Covid-19 pandemic.

Bett emphasizes that one of the core objectives of the project is to secure more markets for Kenya’s honey products exports to the United Kingdom by improving competence in the bee keeping sub sector.

“The training tightened strict adherence to food safety regulations, export rules and regulations and conformity by beekeepers as a way of securing regional and international export markets. As we do this, the National Government through the Kenya Livestock Commercialization Program (KLCP) has been organizing farmers into groups to keep at bay unscrupulous brokers and unlock the unexploited potential that can be realized  from sale of their products that include; Honey, Wax, Pollen, Propolis, Royal Jelly, and Bee Venom,” she offers.

Bett says the NARIGP has incorporated a component of public awareness education towards protecting bee colonies and sustainable agricultural practices aimed at protecting the important sub sector. Under the drive over 25,000 seedlings of indigenous trees that are vital for honey production have been planted in various farms in the region.

She singles out drought, coupled with decline in bee populations, deforestation and poor farming practices as key factors causing a decline in honey production in the country.

She adds that new pests and diseases and indiscriminate use of farm pesticides have hit bee colonies, making beekeeping a decidedly less sweet venture for farmers.

According to a report compiled by Kenya Agricultural and Livestock Research Organization (KALRO), the country produces about 11,000 metric tonnes of honey and 1 to 3 tonnes of beeswax annually.

This, the report indicates, is about 20 percent of Kenya’s potential and the low production is attributed to lack of appropriate technologies, poor beekeeping practices, and low uptake of improved technologies, poor policy guidelines and marketing skills.

Bett notes that the importance of bees in the lives of humans is always underestimated and enough is not being done to protect the insects.

“Bees are critical in providing pollination to crops, therefore, without them, we would not have food. Seventy-five percent of all crops grown for food rely on pollinators, mostly honeybees, for a successful harvest. Without pollination from honeybees, many fruits and vegetables will not be on our grocery shelves.

She adds, “We are working with devolved units to reverse the worrying trend of bee colony decline.  Initiatives aimed at bee colony multiplication include capacity building, provision of bee keeping equipment and bee bulking. In Nakuru County we have teamed up with 200 beekeepers.”

To Ms Pauline Mbote, a Member of Lare Bee Keepers Association, participation of women in the subsector, adding value to produce, awareness and information on markets, and linkages with the private sector, are all factors with potential to sustain growth of the value chain in the bee farming sub sector.

We now have women who are so serious into the business that they have formed groups and bought all the honey harvesting equipment such as the centrifuge machine for extracting honey, a bee suit, honey strainers, the uncapping forks and tanks and the bottling buckets,” she explains.

Mbote says use of modern Langstroth hives was gaining currency among beekeepers as they were easier to maintain and yield cleaner honey compared to others because of their design, which ensures honey does not mix with the larvae.

“Smallholder farmers have focused on the production and marketing of honey and beeswax. Other bee products for which there is high potential market demand – such as propolis and venom – are not currently being considered due to lack of technology and skills.

Mbote identifies key issues affecting beekeepers as lack of standardized prices, competition from neighbouring countries and exploitation by brokers among others.

Njoro Sub-County Agribusiness Officer Hussein Misango, says there was a need to boost honey production in the country to sustain the growing demand.

He hails both levels of government for committing resources to forums that promote bee keeping as an alternative way of making money as climate change brings harsher weather.

“We will need to build capacity for all stakeholders and encourage bee farming as a way of boosting food security and enhancing economic empowerment especially in rural areas. We are committed to rescuing farmers from poor markets by helping them harvest quality produce through training programs in beekeeping areas.

This should be coupled with planting a diversity of plants and indigenous trees in beekeeping areas, preventing deforestation and adopting farming practices that avoid the use of pesticides during the flowering period,” says Misango.

The County administration, he affirms, is on the forefront in promoting planting of a diversity of plants and indigenous trees in beekeeping areas, preventing deforestation and adopting farming practices that avoid the use of pesticides during the flowering period.

He lauds the national government for subsidizing the cost of raw materials used in the making of beekeeping apparatus such as Langstroth hives, Kenya Top Bar Hive, Smokers and Bee suits among others.

Misango further hails the Ministry of Agriculture, Livestock and Fisheries for imparting technical skills to youth and women groups that has enabled them to manufacture the equipment at an affordable cost.

How climate risk insurance can step up livestock rearing