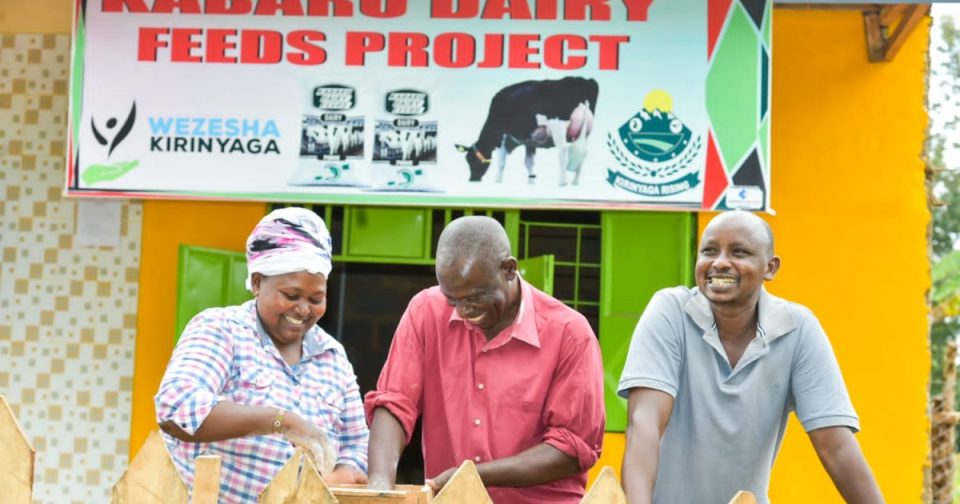 Two of the groups which were supported by the County government of Kirinyaga are now manufacturing poultry feeds to tap into the growing market for chicken feeds.

Initially, the groups had been supported with feed mixers and single-phase motor machines for manufacturing of the dairy feeds but have re-invested their income to expand production.

The county government has also supported many farmers to venture into poultry farming and the groups hope to tap onto the rising demand for chicken feeds.

One of the group, Wiukirie Self Help Group says that apart from expanding its dairy feeds market, it is now making poultry feeds.

Chairperson Jane Muthoni, says the group which started its operation in 2020 has now mastered the art of making feeds and it is expanding its share of the market.

“We have expanded our operations to making of poultry feeds. Our market for dairy feeds has grown and we plan to increase production,” she said.

Muthoni says demand for feeds manufactured by the group has been on a steady rise due to the high quality of the feeds.

“We are selling the feeds to almost every village in Kirinyaga, what we have done is to remain consistent with our high quality mark because we have realized the market is flooded with poor quality animal feeds which are over-priced,” she added.

Paul Wanjohi, the chairman of Kabaru Dairy Feeds says that members of the group have started reaping benefits of the economic empowerment program launched by Governor Anne Waiguru, which has seen them earn money.

“We have not only increased our own milk production, but we have helped farmers reduce the cost of dairy farming. Because we manufacture the feeds in the village, the farmers do not incur cost of transport,” he said.

Paul Muthii, another member of the Kabaru Dairy Feeds says that for many years, he has been grappling with problem of low milk production since feeds bought from other commercial dealers had compromised quality, a challenge that made them aspire to manufacture their own feeds.

“If it were not of the county government, we would not be here. This is a success story, I never thought as a group we could reach here because the equipment are too costly and beyond our reach,” Muthii said.

Susan Mithamo, says that since she started feeding her livestock with products manufactured by Kabaru Dairy Feeds, her daily milk production has risen from four to six litres.

“We are re-investing all the income we are getting from selling livestock feeds back to the projects, we are expanding big to capture the market because the demand for quality feeds and milk is so huge,” she pointed out.

The initiative is one of Governor Anne Waiguru’s Wezesha Kirinyaga economic empowerment programme that is transforming lives of the local community through various agriculture value chain projects.

The governor says four groups in each of the 20 wards are being supported to venture into animal feeds manufacturing.

She said the support to dairy farmers has been extended to the upgrading of dairy cattle breeds through provision of quality Artificial Insemination services.

“We are expanding the AI services from the initial 50,000 cows to another 50,000 cow this year. This will ensure that as we give the animals quality feeds, we also have quality breeds. The county aims at increasing milk production from the current average of five liters per cow per day to 12 litres per cow per day,” she added.