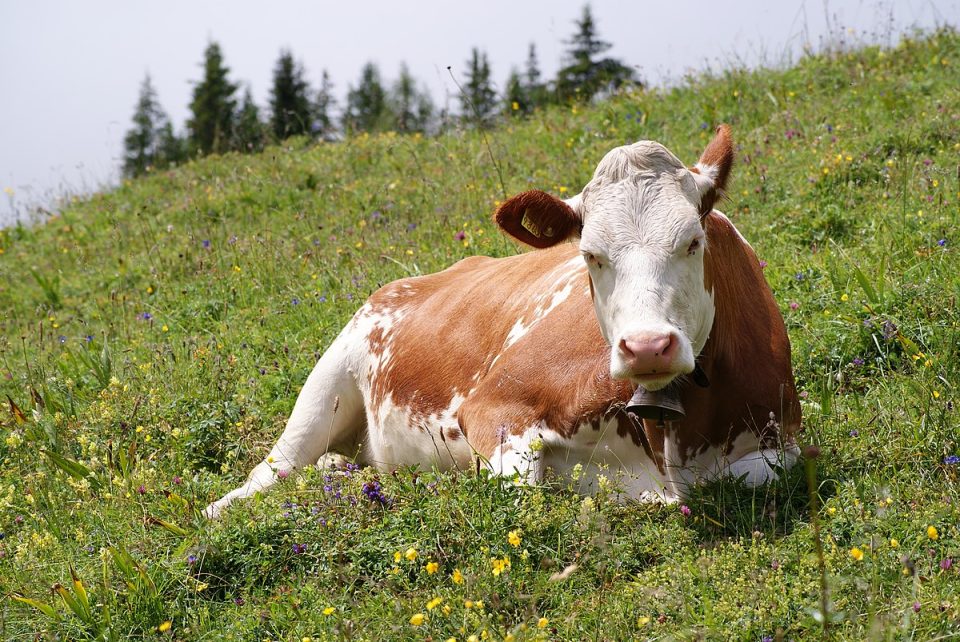 The romanticised picture of the idyllic dairy farm, with contented cows resting on pastures dotted with clover in bloom, plays itself out on Dalewood farm near Stellenbosch in the Western Cape.

“I want to see my cows chewing the cud,” says Rob Visser, owner of Dalewood Fromage.

“That’s when I know they have a good pace of rumination and the microbes and pH levels in the rumen are [optimal].”

Happy, healthy cows with superior genetics, feeding predominantly off pasture, is the winning recipe that Visser has employed on the farm, and ‘winning’ is no exaggeration: he has garnered a host of awards for both his hard and soft cheeses.

All Dalewood white mould cheeses have received annual awards from their inception, either in local or international competitions. And most notably, the Huguenot semi-hard signature cheese has twice received super gold status at the World Cheese Awards, and in 2017 was crowned the third-best cheese in the world at the same awards.

While these awards have served to place Dalewood firmly on the cheese world’s map, it was arguably Visser’s first win 21 years ago that was most significant, for this saw the farm convert to a full-time dairy.

Visser was in fact running a strawberry farm, but had an interest in cheese and kept a small herd of dairy cows. The breakthrough came when he created a Camembert that earned the attention of judges in 2001.

“We took a chance and entered the cheese, and when it won its category we realised we had something special. It was a turning point for the farm; we ripped out the strawberries overnight to plant more pasture and expand our herd,” he recalls.

Healthy soil
Initially, the 25ha of pasture on Dalewood comprised only one or two grass species and was managed conventionally with fertiliser. Then, in 2019, Visser came across research published by Australian soil scientist Christine Jones that was a revelation to him.

“We were never taught at university that fertiliser actually kills microbial activity and fungi in the soil. Only in the last few years have I realised how detrimental farming has been to soil [and] underground water, and it’s mostly from applying fertiliser.

“Soil fungi are very important for feeding the grass and helping to release trace elements in the soil and into the plants, so that they can be absorbed by the cows. This is crucial to herd health and milk quality.”

Dalewood’s tasty cheeses owe their creaminess to Visser’s closed Jersey herd, which produces milk with a butterfat content averaging 5% and a protein content of 3,8%. While these attributes are largely due to genetic selection, the grazing system followed on the farm adds to the full flavour of the milk and the overall vitality of the cows.

Calving takes place all year round, with a seasonal peak after winter. Cow numbers are therefore kept in line with the grazing potential of the pastures, and fluctuate between 120 and 200 cows in milk.

Grazing is rotational, with the herd spending each day on green pastures, which are precisely managed. This begins with nurturing the biological life in the soil; no artificial fertilisers, insecticides or herbicides are used to boost these pastures.

Grasses and weeds
Some 14 pasture species have been planted on the farm: a variety of cocksfoot grasses (Dactylis glomerata L.); six clover species; vetch; serradella (Ornithopus sativus), a winter-growing annual pasture legume; lucerne; and a selection of wild turnips and radishes.

Visser explains that the use of many species provides a symbiotic relationship in the soil that supports fungi and microbial activity. “This is critical for the feeding of the grass. We don’t use fertiliser and still get unbelievable results.”

He has also become more forgiving of weeds in the pastures, allowing the cows to keep them in check through grazing. Weeds that are toxic to the cows are removed manually.
With the ecological balance improving from this pasture management, flocks of birds have returned to the farm.

The guinea fowl, in particular, offer the greatest benefit to Visser’s operation, as they scratch open the cowpats, breaking up the manure to allow for quicker absorption into the soil and increased microbial activity.

One-bite system
Visser and his team follow a high-density, ‘one-bite’ grazing system. “We want the cows to move in, take a bite and move along. We therefore use a density of 100 cows on 0,5ha. The time they spend on each paddock depends on the length and condition of the grass. We measure it and get a feeling of the grazing potential. If it’s hot and dry and there’s less grass, the cows move through the camps more quickly. They return to the same paddock every 30 days, so they’re on a different one every day.”

The farm receives an average annual rainfall of 800mm. Pastures and grazing are structured around seasonal rain, with lucerne-based pastures grazed in summer and kikuyu-based pastures in winter. As the kikuyu fields are prone to waterlogging, they are irrigated only from September to December.

The addition of ryegrasses and clover ensures a high-protein feed in the rainy winter months, which is ideal for the cows in milk. In summer, when the fields dry out and the protein content decreases, heifers and dry cows are placed here.

The lucerne pastures see good growth from September to November, so Visser lengthens this growth spurt by irrigating to supplement the rain.

“The temperatures peak here between January and March so we stop irrigating and allow the grass to dry out. This provides good fodder with a high protein content, and we allow the cows to graze it down to the ground. When the first rain arrives around April, we intersow all the fields with pasture species.”

The herd grazes on clover, wild peas and kikuyu during winter. Visser explains that the first two emerge quickly, as the soil temperature is still high and the days long, and this ensures good grazing in May. The kikuyu, which starts flourishing from May onwards, provides the bulk of the grazing.

Grazing is abundant in spring after the winter rain, and the cows are returned to the pastures at night so that they can fully utilise this resource. They tend to graze more at night during the hotter months.

With 70% of the herd’s feed being pasture, meticulous management is required.
Visser keeps a spreadsheet detailing the history of the pastures, when they were grazed and for how long, and adds comments on why better results are achieved on certain paddocks.

At midday every day, the animals are brought into shaded camps where they receive oat hay. They are then placed in overnight pastures adjacent to the dairy, ready for the next morning’s milking. During this time they also receive feed concentrate.

The Dalewood herd receives 30% of its feed in the form of concentrate. Visser notes that attaining acceptable levels of milk and nutrition cannot be achieved on pasture alone; he therefore supplements the roughage with a grain component that he formulates and mixes himself, relying on his training as a feed scientist.

He also arranges for laboratory tests to verify the levels of nutrition. The mix, which includes maize, lupins, molasses and bran, contains 17% protein content, and each cow receives 7kg/day.

The herd’s average milk production is 20ℓ/ day. Visser says this is lower than the industry standard, but is preferable when taking cow health and milk quality into account.

“We don’t push for production, and have a flat rate of feed that the cows receive irrespective of season. I don’t believe it’s economical to push for higher milk production by feeding more concentrate, because we need to look after the rumen by stabilising it and reducing acidosis so that microbes can flourish. This results in higher-quality milk. When the cows have a high roughage component they get sufficient omega-3s, which are healthy fats that provide good flavour in cheese.”

He emphasises the importance of a varied diet for rumen health.

“I think the entire industry is only now starting to understand the importance of a holistic system, where [good]-quality, diverse pasture forms the foundation. Years ago, dairy cows were grazed on pastures, but there has been such a big shift towards a total mixed ration (TMR) system that we’ve lost crucial knowledge along the way of how to manage pastures and herd diets properly.”

Managing nutrition
According to Visser, pasture management is one of the greatest challenges in dairy farming, and his determination to achieve high-quality pasture drove his decision to do away with synthetic fertiliser.

“The quality of protein obtained in a fertilised pasture is far less than in natural pastures. Generally, clover [doesn’t do well] with fertiliser, and because we focus on the quality of the soil at Dalewood, there are so many more nutrients and trace elements available to the plants. For example, soil with high microbial activity has higher amounts of magnesium and calcium that are available to the plants for uptake, and therefore the cows as well,” he says.

Manure, mixed with gypsum, is spread on the pastures using a manure spreader. The holistic nature of the feeding regime means that the cows’ manure is especially nutritious for the soil and grass.

“The bokashi that we put in our feed concentrate adds thousands of species of effective microbes to the cows’ diet. This is excreted with the manure and feeds the soil. The high concentration of microbes stabilises the pH in the rumen, which in turn increases the absorption of protein and lowers the ammonia content of the manure.

A high ammonia content in manure means that the protein in the cows’ feed is not being absorbed properly, so it’s excreted. And manure with high ammonia levels isn’t good for the soil,” Visser explains.

An obvious challenge is that the seasonally varying quality of the pasture influences milk production, which affects cheese production and income. While pasture quality has an undisputed effect on milk quality, genetics play a major role in producing milk with a high protein content. Dalewood therefore sources semen from around the world, buying the best quality available.

“Genetics have a big impact on profitability. Somatic cell count (SCC) can be bred for, so we choose bulls with a high SCC count.

“While we would be bold to say our pasture system improves this count, we can attest to the fact that a healthy cow has a far better ability to withstand infection.

“Finding the economic sweet spot with cows that are healthier, less prone to mastitis, and more fertile, has a lot to do with going back to basics and placing the emphasis on pasture feeding rather than TMR. In doing so, we also reduce our input costs, and the overall effect is happy, healthy cows that cost less to feed,” says Visser.